Polls Tie Obama, Romney 2 Days ahead of US Election 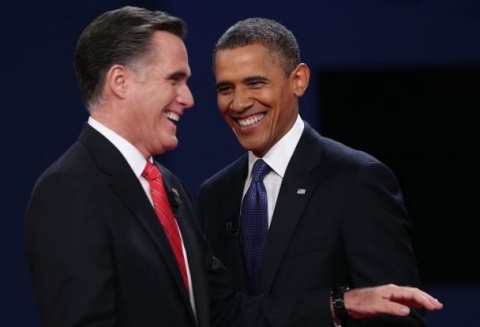 The US presidential candidates are heading into the final two days of campaigning still in a neck and neck race with the outcome being a very close call.

A Sunday opinion poll of ABC News and the Washington Post put the two candidates at 48%, with even voters who term themselves independents split evenly on 46%.

Obama remains slightly ahead in most of the nine-or-so swing states that will determine the election. He has the support of women (6% higher than Romney) and of 59% of ethnic minorities. 25% of young people also support the incumbent President, which is the same share as in 2008.

Romney is favored by the whites, the seniors and the evangelical groups.

Opinion polls published on Saturday showed Obama well-placed in Iowa, Nevada and Ohio, but most remain within the polls' own margins of error.

The Republican will campaign Sunday in Iowa, Ohio, Pennsylvania and Virginia, while Barack Obama heads for New Hampshire, Florida, Ohio and Colorado.

Both candidates addressed large rallies on Saturday in key swing states, but, according to BBC, are showing signs of exhaustion as they continue their daily, multiple-state visits to attract any undecided voters in the marginal battleground states that will determine the winner.

Former President Bill Clinton was also suffering as he joined Obama in Virginia, addressing the rally in hoarse tones, saying he had "given my voice in the service of my president".