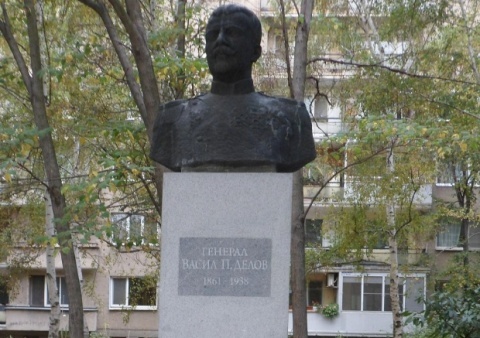 The monument of Gen. Delov in the southern Bulgarian city of Kardzhali. Photo by BGNES

The Makaza border pass at the Bulgaria-Greek border should be named after General Vasil Delov, under the proposal of the opposition Bulgarian Socialist Party, BSP.

The proposal was read in the Parliament Friday in a declaration criticizing the actions of the municipal councilors in the southern city of Kardzhali.

According to the left wing, such move will be in line with the decision to rename cross-border checkpoints on the southern border of the country along with reviving the memory of the General and embedding it on historical and geographical maps.

BSP further say they count on strong political and public support and the quick reaction of the State institutions in order to make the proposal a reality.

The proposal was made in connection with the recently blocked-by-DPS, (the ethnic Turkish Movement for Rights and Freedoms) intention of the local authorities in Kardzhali, which has a large ethnic Turkish population, to award posthumously an Honorary Citizen title to Gen. Vasil Delov. The award was scheduled as part of Bulgaria's celebration of the 100th anniversary since the start of the Balkan War in October 1912, in which Bulgarian troops liberated much of the Bulgarian-populated parts of the Southern Balkan Peninsula from the rule of the Ottoman Empire.

The nomination was included as the last item on agenda for the celebrations with 16 council people from BSP and GERB voting for it, and 22 from DPS abstaining, thus it was not approved.

This marred the celebrations of the anniversaries of the Balkan War and the liberation from Ottoman rule, stirring a huge political scandal. It prompted the MP from the ruling party Citizens for European Development of Bulgaria, GERB, Tsveta Karayancheva, to establish and initiative committee that launched a petition to award posthumously to Gen. Vasil Delov the country's highest order Stara Planina.