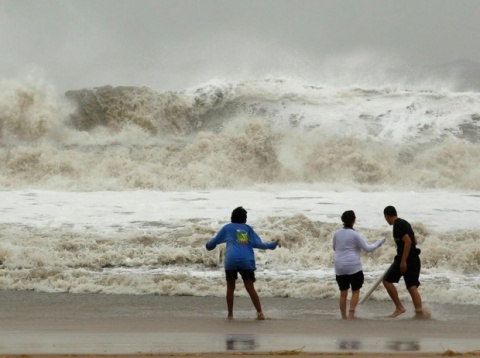 Storm Sandy left at least 94 people dead in the US, cut power from millions of homes and paralyzed transport on much of the East Coast. Photo by BGNES

The death toll from the monstrous storm Sandy that hit the East Coast of the US and Canada has reached 95 people.

There is 1 fatality in Toronto, Canada.

Over 4 million remain without power with 53 000 emergency crew members working round-the-clock to restore it. They, however, say it might take several days to do so.

Some of the NYC boroughs might be in the dark until November 11, which, on top of all other inconveniences, could impact the November 6 presidential election. Power supply in lower Manhattan is expected to be restored by Saturday.

Most damage has been caused by floods, not the strong winds. Parts of the subway remain closed. 14 out of 23 lines are running free of charge.

The NY governor, Andrew Cuomo, announced that 1 million food packages will be distributed throughout the State.

The NYC Mayor Michael Bloomberg informs that 400 from the National Guard and 150 volunteers are going door to door to deliver the packages with the elderly being a priority. Many of them are stuck inside their homes because elevators are not working.

The Red Cross has opened 12 mobile kitchens providing 200 000 food portions a day. Some churches are also distributing food and clothes.

Fueling in NJ has turned into a nightmare. At many fuel stations there have been long lines of cars and of people carrying jerry cans.

One owner of a fuel station in New Jersey told the New York Times he had been pumping gasoline for 36 hours and had to call the police and turn off the pumps temporarily as tempers among customers rose. Fights have broken at other fuel stations as well.

There were reports of sharp price increases by some suppliers.

Well over half of petrol stations in New Jersey and in New York City remain closed.

In NJ one third of the population is without power with locations near the water unrecognizable and in shambles.

Meanwhile, Bloomberg has endorsed President Barack Obama for next week's presidential election, saying Storm Sandy had highlighted climate change, and that only one candidate saw this as an "urgent problem".

The Mayor is also firm in the decision to hold the presidential race on November 6, saying: "This city is a city where we have to go on."

It was further reported that the US Coast Guard are discontinuing its search for the captain of tall ship "Bounty" that sank off the North Carolina coast during the storm.

The Coast Guard searched for more than three days and around-the-clock for 63-year-old Robin Walbridge, using ships, helicopters and large planes before suspending its efforts Thursday.

The HMS Bounty originally was built for the 1962 film "Mutiny on the Bounty" starring Marlon Brando, and it was featured in several other films over the years, including one of the "Pirates of the Caribbean" movies, starring Johnny Depp.

The tall ship sank before dawn Monday in hurricane waves about 90 miles off Cape Hatteras. The crew abandoned ship in two life rafts, and the Coast Guard rescued 15 crew members. Claudene Christian, 42, was among those rescued, but she died.