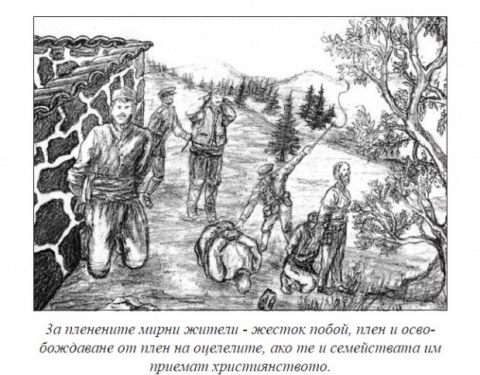 An image from the provocative Islamist book states that the Bulgarians tortured those Bulgarian Muslims who refused to return to Christianity after they over the Rhodope region in 1912. Photo by BGNES

An Islamist book which denies that Bulgaria liberated the region of the Rhodope Mountains from the Ottoman Turkish Empire in the First Balkan War of 1912-1913 has been found to be in distribution in mosques across Southern Bulgaria.

The scandalous story hit the Bulgarian media on Thursday, just weeks after Bulgaria marked the 100 year since the start of its victorious war against the Ottoman Empire, which conquered the Second Bulgarian Empire in the late 14th centuries and ruled the Bulgarian lands and people for almost 500 years – a period widely seen as shameful and denigrating by the Bulgarians, and known as Ottoman or Turkish Yoke.

The shocking book entitled "The Balkan Wars in the Rhodope Mountains, 1912-1913" states that the Bulgarian troops that took over the region in today's Southern Bulgaria and Northern Greece did not in fact liberate the locals – many of whom are ethnic Bulgarian Muslims also known as Pomaks – but instead "enslaved" and oppressed them".

The book is the first edition published by a recently founded NGO called "European Institute Pomak", and is authored by Ismen Redzhepov. Critics have been quick to declare that it seems to be in line with a number of other attempts since the collapse of the communist regime in Bulgaria in 1989 to brainwash the ethnic Bulgarian Muslims into determining themselves to be Arabs, Turks, Islamists, or to subscribe to some other ethnic or religious characteristic that is distinct or adverse to the mainstream Bulgarian consciousness.

According to the provocative, apparently Islamist book, whose content historians have been quick to describe as "made-up", Ottoman Turkey was ready to give the Rhodope Mountain region to Bulgaria back in 1912 but instead the Bulgarian Christians decided to wage a war, and then committed acts of "genocide" against the Pomaks.

Readers of the book in question have commented that it was "strange" because it contains Marxist as well as pro-Islamist statements.

"The foundations of Islam rest on a system of values that turns it into the dominant global system," the author of the book declares.

Furthermore, Redzhepov, together with the chairman of the so called "European Institute Pomak" Efrem Mollov, claims that the Bulgarian Muslims, aka Pomaks – who are widely believed to be the descendants of Christian Bulgarians converted voluntarily or by force to Islam during the period of Ottoman Yoke – were in fact descendants of the so called Proto-Bulgarians who fled into the mountains when Knyaz Boris I, ruler of the First Bulgarian Empire in 852-889 AD, adopted Christianity as the national religion in 864 AD, abandoning the Proto-Bulgarians' pagan religion.

According to the author of the provocative book, today's Bulgarian statesmen are continuing to conduct some kind of policy of "ethno-religious cleansing" of the region of the Rhodope Mountains "through economic and spiritual genocide".

The book was first reported to the public by one of Bulgaria's most renowned historians, Prof. Georgi Markov, for its outright lies and Islamist character, and its distribution in the mosques in the Rhodope region is said to have been terminated.

As the ethnic Bulgarian Muslims known as Pomaks, whose number is estimated at about 130 000, have been struggling to find their place in Bulgaria's predominantly Bulgarian Orthodox (Christian) society with its large ethnic Turkish Muslim minority, their community has generally been believed to be susceptible to proselytism efforts by Islamist or other agents.