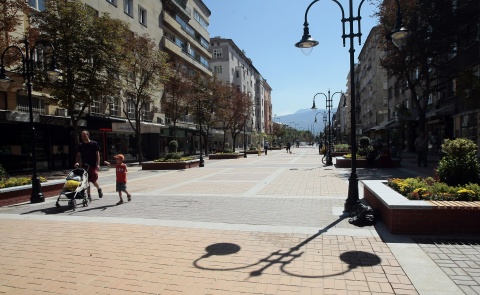 The Sofia Municipality has started working on a project worth a total of EUR 100 M for the overall rehabilitation of the road network in the capital.Photo by BGNES

The Sofia Municipality has started working on a project worth a total of EUR 100 M for the overall rehabilitation of the road network in the capital.

Doncho Barbalov, Deputy Sofia Mayor in charge of finance, announced Thursday that the European Investment Bank (EIB) was ready to provide half of the money, while the other EUR 50 M would come from the municipal budget.

He said that his aim was to bring about a significant change to the condition of streets in the city in the next 3 or 4 years.

Barbalov said that overall rehabilitation meant not only asphalt resurfacing of the roads but also repairs of sidewalks, street lamps, road signs, and grassing.

Apart from the rehabilitation of existing streets, the construction of new ones is envisaged, which is of crucial importance for traffic in Sofia.

The Deputy of Sofia Mayor Yordanka Fandakova further explained that the deal was yet to be discussed officially by the Municipal Council with a list of sites requiring urgent repair, among which Lavov Most, Copenhagen Blvd, etc.

He said that an economic analysis of the project was being made and the return of investments was being calculated.

Barbalov, as cited by private TV station bTV, added that a technical analysis of the roads in Sofia was also being carried out.

He said that the EIB offered an indicative interest rate which was very close to what they would give to Bulgaria in principle.

The Deputy Mayor of Sofia made clear that the fixed interest on the loan amounted to around 3.6% for 25 years, including a four-year grace period.

He emphasized, however, the terms were preliminary and had to be clarified during the talks.