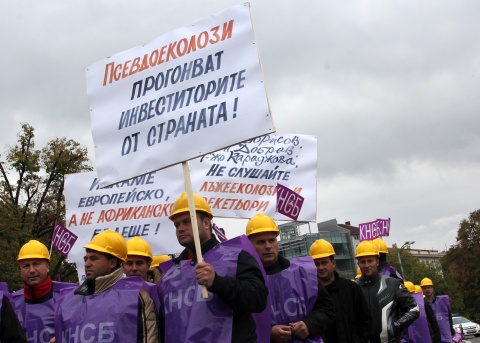 Hundreds of miners and metallurgy workers staged a protest rally Thursday in Sofia to demand a strategy for the development of the heavy industry. Photo by BGNES

Hundreds of mining industry workers staged a protest rally Thursday in Sofia against the pressure exerted over the mineral and raw material industry.

The demonstrators also called for retaining employment in mining sector.

The heads of federations at the Confederation of Independent Trade Unions in Bulgaria (CITUB) and the Podkrepa Labor Confederation submitted a declaration to the Ministry of Economy, Energy and Tourism demanding instant checks of the spreading claims about violations in the sector.

"Over the past few months we witnessed grave insinuations and manipulations," CITUB President Plamen Dimitrov, told the protesters.

He suggested that media outlets had distributed claims that mining, metallurgy, and the heavy industry in general, had no future.

Dimitrov accused Bulgarian media of backing the stance that it was better to sacrifice these industries to the benefit of nature.

The protesters argued that they had become the victim of a media campaign led by "pseudo-ecologists" with vested personal and group interests.

The CITUB President suggested that green had turned very modern, especially green banknotes, not so much ecological standards which Bulgaria claimed to observe for a long time.

He added that people interested in the observance of eco norms in the heavy industry would know that his statement was true, while the ones who doubted his words could check.

The trade union leader announced that miners and metallurgy workers wanted guarantees by the government of a stable future and work places in the sectors.