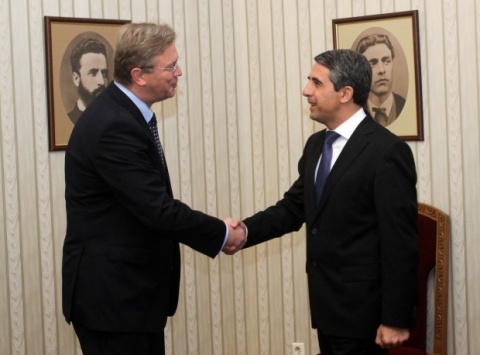 The Republic of Macedonia is not ready to join the European Union, Bulgarian President Rosen Plevneliev has told EU Enlargement Commissioner Stefan Fuele.

Plevneliev and Fuele, who met in Sofia Wednesday, technically failed to agree on Macedonia's readiness for EU accession.

While the EU Enlargement Commissioner Fuele said Macedonia had been waiting for too long to get admitted to talks for EU membership, Bulgaria's President has stressed that the Macedonian authorities are engaged in anti-Bulgarian hate language and measures affecting Macedonians with Bulgarian self-consciousness, who are also Bulgarian citizens.

"The authorities in Skopje will unlock their EU perspective not through propaganda and marketing campaigns but through actual reforms and actions for good-neighborly relations," Plevneliev told the EU Commissioner.

The Bulgarian President pointed out that Sofia does not deny a EU perspective to Macedonia, and in fact supports that, but takes into account the fact that the former Yugoslav republic is not ready to start talks for EU membership.

systematically employing an ideology of hate towards Bulgaria," Plevneliev stated.

"It is strategically important for the long-term stability in the Balkans that the government in Skopje starts applying the European approach towards its neighbors, without claims and manipulations. It is high time that the government in Skopje be done with its anti-Bulgarian campaign, and the manipulation of historical facts. The responsible European approach towards one's neighbors and the next generation is to preserve history whatever it might be," the Bulgarian President added.

Stefan Fuele has disagreed with Plevneliev, stating that Macedonia has been waiting for too long "before a closed door" expecting membership in NATO and the EU.

"I am one of those people who believe that it is not good to leave our partners waiting before the door for too long. I believe that integration is the best means for coping with nationalism, and I am convinced that isolation boosts nationalism," the EU Commissioner said.

Bulgaria's President Plevneliev has thus in effect reiterated the position of Foreign Minister Nikolay Mladenov who recently made it clear that Bulgaria does not support Macedonia's EU entry unconditionally.