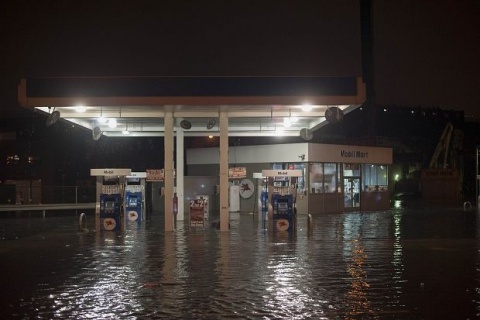 It will be days until businesses, services, transport, and electric power supply in NYC and the entire US Northeast come back to normal. Photo by EPA/BGNES

The monstrous storm Sandy that hit the US East Coast has taken at least 48 lives with at least 22 people killed in New York City alone.

The death toll was reported by BBC Wednesday.

Many of the casualties have been caused by falling trees, the Bulgarian Darik radio informs, citing AFP and AP.

Sandy brought a record storm surge of almost 14ft (4.2m) to central Manhattan, well above the previous record of 10ft during Hurricane Donna in 1960, the US National Weather Service said, cited by BBC.

Maryland appeared to have the worst of the rain and snow - with falls of 12.5 in (32cm) and 28 in respectively.

Sandy has also marred the traditional October 31 festivities with cancelations of the NYC parade and the White House party for children. This is the first cancellation of the parade in its 39 years of history with the police saying it is mainly due to the power outages on its route.

According to BBC, New York Governor Andrew Cuomo has said: "We have not seen damage like this in a generation."

BBC further informs that businesses and services in the US Northeast, which were closed for two days over the storm, are expected to start reopening on Wednesday along with some airports, trams, ferries, government buildings, schools, the New York Stock Exchange and the Nasdaq.

The last time the stock exchange shut down for two days was in 1888.

Two of the New York area's three main airports, JFK and Newark Liberty, were scheduled to open for a limited service on Wednesday, but huge delays are expected after the cancellation of more than 18 000 flights.

The storm is still causing severe disruption in moving inland from the coast with heavy snow and rainfall. The forecast is for Sandy to weaken as it turns north into Canada. An estimated eight million homes and businesses remain without power. Most of New York's bridges remain closed. Schools in NYC are also closed, amidst worries of how to handle the November 6 presidential election since electric power would not be restored in many locations by that date.

Joseph Lhota, Head of the Metropolitan Transit Authority (MTA), is quoted saying that the New York's subway system, which is still shut Wednesday, has sustained the worst damage in its 108-year history.

At least seven subway tunnels were flooded and damaged electrical equipment will have to be cleaned before the subway can reopen.

BBC cites New York Mayor Michael Bloomberg informing there was "no timeline" for when the subway would restart, but he hoped buses could begin running again on Wednesday.

Also on Wednesday, President Barack Obama, who has suspended his election campaign, is due to visit affected areas in New Jersey with New Jersey Governor Chris Christie.

Christie, a Republican and firm supporter of Obama's rival Mitt Romney, has lauded the Democratic President for his handling of the storm.

The cost of clearing up after storm Sandy has been estimated at USD 30-40 B.

Meanwhile, along with the interest in the storm, a number of "pranksters" have popped-up on social networks giving intentionally misleading, troublesome and sensational accounts, forcing authorities and the media to issue official rebuttals.