Hurricane Sandy Surges in Eastern US 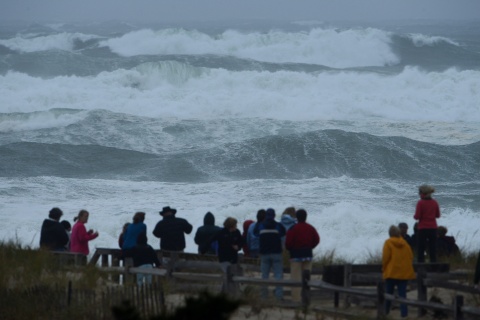 Sightseers stand at the end of a walkway to Nauset Beach several hours before the expected landfall of Hurricane Sandy in Orleans, Massachusetts, USA, 29 October 2012. EPA/BGNES

US Government forecasters warned the large, slow-moving Category 1 hurricane will deliver gale-force winds, rain, flooding and even snow across a much broader swath stretching from North Carolina to New England—including coastal storm surges of as much as 11 feet in New York Harbor, the WP reported.

Sandy was located 205 miles southeast of Atlantic City, N.J., and 260 miles south-southeast of New York City at 11 a.m. EDT, moving toward the north-northwest at 18 miles an hour, according to the National Weather Service. Hurricane-force winds extended as much as 175 miles from Sandy's center.

The storm is expected to turn toward the northwest shortly and then to the west-northwest Monday night, with its center making landfall "along or just south of the southern New Jersey'' coast, the weather service predicted.

Tropical-storm conditions were already occurring Monday over parts of the mid-Atlantic states from North Carolina to Long Island in New York state, with hurricane-force winds possibly arriving in areas including New York City by evening. Forecasters warned winds on the upper floors of high-rise buildings will be significantly stronger than at ground level.

The US weather service warned of potential flooding in coastal areas as rising waters from the Atlantic Ocean are pushed toward shore. It said storm surges could reach 6 to 11 feet in Long Island Sound, Raritan Bay and New York Harbor. Surges could reach eight feet in along parts of the coast from Ocean City, Md., to the border of Connecticut and Rhode Island, and six feet in parts of North Carolina and on Cape Cod in Massachusetts.

New York Gov. Andrew Cuomo said Monday that the state will close the Holland Tunnel and the Hugh L. Carey Tunnel between Brooklyn and the Battery in Manhattan at 2 p.m., due to the risk of flooding. The Massachusetts Bay Transportation Authority said it planned to suspend all service by 2 p.m.

US stock and options markets were closed Monday, the first unscheduled, market-wide shutdown since September 2001. Markets may remain closed Tuesday, exchange officials and traders said. An earlier plan to only close floor trading was deemed too complicated, people with knowledge of the matter said. Other investors said half-empty trading desks and thin trading volume could have made the market susceptible to swings.

The US National Weather Service said two cold fronts, one west of Hurricane Sandy and another north, were drawing the warm-air hurricane toward the populous coast and expected to fortify Sandy's reach and intensity.

New York officials closed down public transit Sunday evening, a bus- and rail-system that normally ferries about 8.5 million passengers a day during the workweek. New York city schools, which serve more than a million students, also were ordered shut until the storm cleared. New York Mayor Michael Bloomberg told an estimated 375,000 residents to leave flood-prone neighborhoods in Brooklyn and Manhattan.

Amtrak canceled all Northeast Corridor and Keystone Service route trains on Monday, as well as other inland routes along the East Coast. New Jersey, Philadelphia and Washington also shut down local transit systems.

The storm interrupted the campaigns of President Barack Obama and Republican presidential candidate Mitt Romney, with the election a little more than a week away. Romney canceled campaign stops in Virginia and New Hampshire. Obama canceled his campaign event Monday in Florida with former President Bill Clinton. The campaign also canceled events Monday in Ohio and Virginia, as well as Tuesday trips to Colorado and Wisconsin.

Obama will remain in Washington to "closely monitor the impact of and response to Hurricane Sandy," the White House said in a statement.