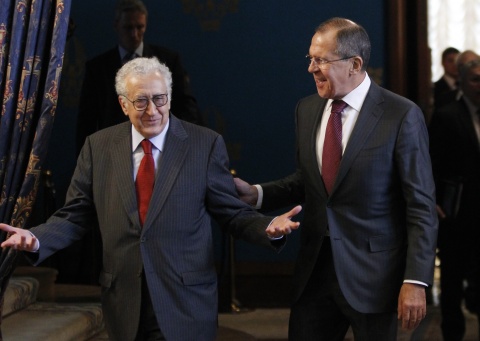 Negotiations to end the 19-month civil war in Syria should continue, despite the failure of a United Nations-brokered ceasefire over the Eid al-Adha holiday, UN and Arab League envoy Lakhdar Brahimi said on Monday.

"The situation is bad and getting worse," a downbeat Brahimi said after a meeting in Moscow with Russian Foreign Minister Sergei Lavrov, as cited by RIA Novosti.

"The government says they are fighting terrorists and only terrorists, and that it is their duty to do so – to protect their people. And the other side says 'we're fighting a very cruel government that is persecuting us, and we are defending ourselves'," he added.

But he stressed the collapse of last week's truce would not weaken "our resolve" to bring an end to fighting which has killed tens of thousands of Syrians since an uprising against President Bashar al-Assad began in March 2011.

"We shall continue to work as hard as we possibly can and in cooperation with everybody, inside Syria and outside of Syria, to bring the level of violence down, put an end to it, and launch Syria on the road to building the new Syria," Brahimi stressed.

Syrian opposition activists say 150 people were killed on Friday, the day the truce was supposed to come into force, and over 130 deaths were reported on Saturday as regime warplanes hammered Damascus. Both sides blamed each other for the breakdown of the truce.

But Brahimi stressed there were no plans to send UN peacekeepers to Syria. Lavrov said Moscow was disappointed by the failure of Brahimi's ceasefire initiative, but there was little sense in blaming either side.

"Our main task at this stage is to get all the Syrians who are fighting each other to stop shooting and sit down at the negotiating table," Lavrov said. "It is essential that all outside players use their influence with various Syrian groups, be it government or opposition forces, to send the same signals."

UN Secretary-General Ban Ki-moon said on Monday he was "deeply disappointed" that the ceasefire had collapsed and urged government and opposition forces to cease hostilities.

RIA Novosti comments that Western powers have condemned both Russia and China for their repeated refusal to back UN sanctions against Assad's regime, which the United Nations has accused of complicity in the massacre of unarmed civilians. Russia says the UN resolutions contain a pro-rebel bias and that both sides are to blame for the continued fighting, which Syrian rights groups say has claimed up to 35,000 lives.

Russian President Vladimir Putin vowed earlier this year not to allow a repeat of last year's "Libya scenario," which saw the ouster and murder of Libyan dictator Muammar Gaddafi after a NATO military campaign.