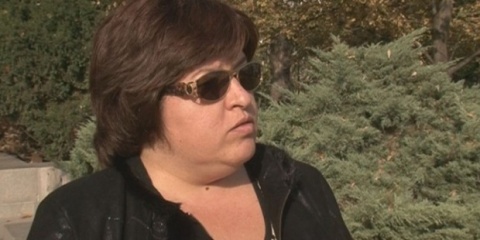 Kalinka Pencheva has been sacked as the spokesperson of the Regional Police Directorate in Varna after harassing local journalists for years. Photo by bTV

Bulgaria's Interior Minister Tsvetan Tsvetanov has finally fired Kalinka Pencheva, the police spokesperson who publicly insulted a man who dared to take pictures of napping policemen in the Black Sea city of Varna.

Tsvetanov has imposed on Pencheva "the gravest disciplinary punishment for violating the Ethical Code of Conduct of the civil servants from the Interior Ministry", the ministry said on Monday.

Thus, Pencheva is no longer the spokesperson of the Regional Police Directorate in Varna because her actions "harmed the prestige of the institution".

Varna police spokesperson Kalina Pencheva commented on the case, telling the Btv private channel that Maximov is "a fool; a peasant fool, who has nothing to do and is bored."

Even though the Prime Minister ordered Pencheva's dismissal, Interior Minister Tsvetan Tsvetanov revealed that he would wait for the end of the disciplinary proceedings against her before making a decision. However, Tsvetanov had described her behavior as "intolerable."

According to reports, Pencheva is known to have been threatening and harassing journalists in Varna for years in numerous cases, many of which remained unreported to the public.

"Her actions are unacceptable for a spokesperson of the Interior Ministry. Such actions can provoke aggression," Bulgaria's Interior chief Tsvetan Tsvetanov is quoted as commenting.