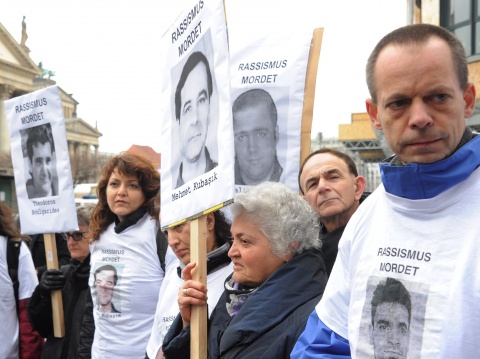 Demonstrators hoist posters with the photos of some of those killed by members of a neo-nazi cell, at the Gendarmenmarkt in Berlin, Germany, 23 February 2012. Photo by EPA/BGNES

The German government has paid EUR 832 000 in compensations to the relatives of victims of terrorist neo-Nazi group NSU.

According to a report of the German Federal Office of Justice published Monday by the Osnabruecker Zeitung newspaper, the spouses and children of those killed in the attacks are to be paid EUR 10000 and siblings EUR 5000.

The families of victims of the National Socialist Underground will also be reimbursed for funeral expenses, Deutsche Welle informs.

The survivors of the two bombings in Cologne attributed to the group received EUR 140000 in total.

The compensation comes nearly one year of after the right-wing extremist group was disbanded.

The Zwickau-based NSU is responsible for killing ten people in the period 2000-2007, including nine Turkish and Greek immigrants and a police officer.

The group is also suspected of carrying out two bomb attacks in Cologne in 2001 and 2004, which left 23 injured, as well as 14 bank robberies.

The three-member neo-Nazi cell collapsed when its last core member, Beate Zschaepe, turned herself into the police November 4, 2011.

Two of her fellow members committed suicide in their apartment shortly before that.