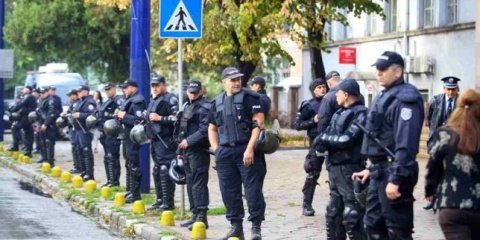 Riot police gathered in the area in order to prevent potential clashes between nationalists and Muslims. Photo by bTV

Bulgarian far-right formation staged separate anti-Muslim protests in the town of Pazardzhik, as a local court was holding a new hearing in a highly publicized radical Islam trial.

Two marginal far-right formations, Ataka (Attack) and the National Front for Salvation of Bulgaria, could not unite and staged two separate rallies, often trying to outshout each other, according to local media.

Even though Ataka had claimed that some 600 of its supporters would join the party's protest, fewer than 100 people took part in it, dnevnik.bg informs.

The nationalist formations protested against what they expected to be a mass presence of Muslims in front of the Pazardzhik court.

The protesters have not clashed with Muslims, the Focus news agency informs.

Last week, nationalists demanded that local authorities deny the access of "women in burqas and bearded men in black dressing gowns" to the area in front of the court in Pazardzhik,

The trial against the 13 members of the Al Waqf-Al Islami organization's local branch was launched on September 18.

All suspects have pleaded not guilty.

Bulgarian Muslims have already staged several mass protest rallies in front of the court building. They say the charges are groundless and they fear a new "Revival Process," a remake of the one from the 80s of the last century when the Communist regime forced them to change their Muslim names with Christian ones, is looming in Bulgaria.