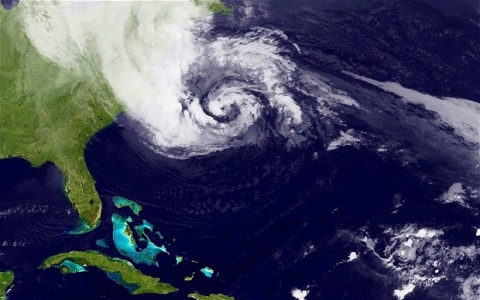 A satellite image of Hurricane Sandy, pictured at 00:15 UTC, churns off the east coast of the US. Photo by NASA

"This is a serious and dangerous storm," Bloomberg has told a news conference, as cited by The Telegraph.

The NYSE and Nasdaq stock markets will be closed on Monday and possibly longer as Hurricane Sandy is expected to hit New York city.

US authorities ordered coastal evacuations and airlines canceled transatlantic flights as Hurricane Sandy bore down on the east coast after claiming 66 lives in the Caribbean.

The US National Hurricane Center said early Monday that the Category 1 hurricane has top sustained winds of 75 mph, with higher gusts. It is moving toward the north at 14 mph after moving northeast Sunday night, CBS News informs.

CBS News said on Monday that Sandy is about 425 miles southeast of New York City and the center of the storm is expected to be near the mid-Atlantic coast on Monday night.

States of emergency have been declared in Maryland, New York, Pennsylvania, Virginia, Washington DC and a coastal county in North Carolina, BBC informs.