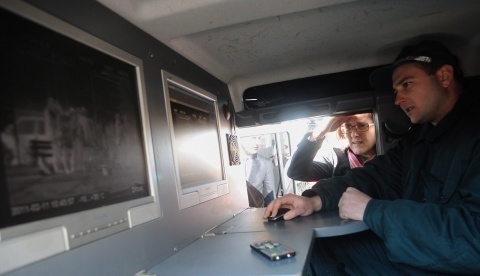 A Bulgarian border policeman monitors screens as European home affairs Commissioner, Cecilia Malmstrom looks on during her visit to the Kapitan Andreevo border crossing point between Bulgaria and Turkey, 11 February 2011. Photo by EPA/BGNES

Bulgaria's interior minister will attend EU Justice and Home Affairs Council meeting in Luxembourg on Thursday, which will discuss the country's Schengen bid, but postpone a final decision.

As a result, the decision on the accession of Bulgaria and Romania to Schengen will be postponed for March 2013, sources have disclosed.

The agenda of the meeting of the Justice and Home Affairs Council on Thursday also includes a discussion of counter-terrorism measures against the backdrop of the July 18 bus bombing in Burgas and the prevented terror attack in Cyprus in mid-July.

The agenda also features a discussion of the recent request of the six EU Member States for the introduction of a safeguard clause terminating visa-free travel for nationals of Western Balkan countries.

On the eve of the meeting the Bulgarian Telegraph Agency reported a decision backing Schengen expansion must be approved unanimously by all Ministers participating in the sitting, while three countries have already opposed the accession of Bulgaria and Romania to the European border-free area.

The source, speaking on condition of anonymity, refused to name the two other countries opposing Bulgaria and Romania's Schengen bids apart from the Netherlands.

The source said that the recent political developments in the EU, including the elections in the Netherlands and the events in Romania, contributed to the decision to block Schengen expansion.

The source argued that there was no schedule for the expansion of the Schengen area, despite the fact that it was universally recognized that Bulgaria and Romania met the accession requirements.

In September, when the Interior Ministers of EU Member States were also expected to discuss Schengen expansion, the meeting was postponed on the grounds that too few of the issues on the agenda had reached a stage allowing decisions to be made.

Over the past months, Germany and Belgium grew increasingly skeptical towards Bulgaria and Romania's Schengen bids.

Their discontent was triggered by activities of the Romanian government labeled as a threat to the rule of law by observers.