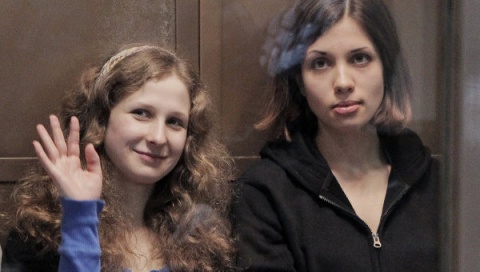 The two were sentenced in August to two years in prison for "disorderly conduct" at the Christ the Savior Cathedral.

Nadezhda Tolokonnikova will serve her two-year prison sentence in the Volga area Republic of Mordovia and Maria Alyokhina - in the Urals city of Perm.

"This information is not official, no official information is available to us so far. I learned it from my sources, they had checked it," Volkova stated, as cited by RIA Novosti.

A spokeswoman for the Mordovia penitentiary service, Maria Khaniyeva, refused to comment on the information.

"We will not say anything until we get written permission to disclose information to the media. The administration of the colony is obliged to inform one of the inmate's relatives on his or her choice within ten days from the moment of arrival," she said.

A total of three Pussy Riot members were sentenced to prison in August for their "punk prayer" in Christ the Savior Cathedral, Moscow's main Orthodox Church, in a case that grabbed international headlines and galvanized criticism against the Kremlin for what critics have said is a heavy-handed punishment for a light offense.

Later, the Moscow City Court reduced the sentence of Pussy Riot member Yekaterina Samutsevich's from two years in prison to probation due to the fact that she was detained by security prior to reaching the stage, and so did not actually participate in the protest.