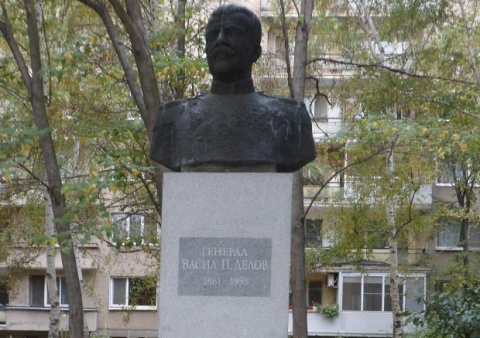 The monument of Gen. Delov in the southern Bulgarian city of Kardzhali. Photo by BGNES

The controversy with the honorary citizenship of Gen. Vasil Delov in the southern city of Kardzhali stems from the lack of common interpretation of the common history of Bulgarians and ethnic Turks.

The statement was made in the Parliament Wednesday by Lyutvi Mestan, Deputy Chairman of the ethnic Turkish party Movement for Rights and Freedoms, DPS.

Mestan spoke in connection with the blocked-by-DPS intention of the local authorities in Kardzhali, which has a large ethnic Turkish population, to award posthumously an Honorary Citizen title to Gen. Vasil Delov. The award was scheduled as part of Bulgaria's celebration of the 100th anniversary since the start of the Balkan War in October 1912, in which Bulgarian troops liberated much of the Bulgarian-populated parts of the Southern Balkan Peninsula from the rule of the Ottoman Empire.

The nomination was included as the last item on agenda for the celebrations with 16 council people from BSP and GERB voting for it, and 22 from DPS abstaining, thus it was not approved.

This marred the celebrations of the anniversaries of the Balkan War and the liberation from Ottoman rule, stirring a huge political scandal. It prompted the MP from the ruling party Citizens for European Development of Bulgaria, GERB, Tsveta Karayancheva, to establish and initiative committee that launched a petition to award posthumously to Gen. Vasil Delov the country's highest order Stara Planina.

"We need a common and positive, uniting approach when interpreting history, without nihilism and rejections. The honorary titles can be awarded only to those great sons and daughters of a nation who have the resource to be role models for any and all contemporary citizens, despite their religious or ethnic origin. We have such undisputable individuals and events – Vasil Levski and March 3 – the Liberation of Bulgaria from Ottoman rule," the DPS declaration reads.

According to the ethnic Turkish party, "a century is a measuring unit for historical time, but it would not be enough to wipe out from the memory of current generations the human dimensions of the tragedy of war; the pain from the loss of ancestors in the Balkan War."

"These historical faults from the wars of the early 20th century are the basis of the Balkan peoples inability to have a common geo-strategic perspective. If we have the common interpretation, then the personality and contributions of Gen. Delov would naturally become part of the public consciousness, not through political acts, and if such are needed, the common interpretation will always lead to consensus", said Mestan, calling on all to not use the Kardzhali case for political gains to avoid risks of division of society and threats to ethnic tolerance.

Meanwhile, GERB MPs declared firm opposition to attempts to discredit the General, stressing that over the weekend DPS tried in Kardzhali to replace historical truth under the pressure of external factors and in servicing political partisanship.

"We from GERB see the DPS behavior as outrageous. It leads to artificially creating abysses among people in the region and demonstrates a deficit of democracy. This refusal to award Gen. Delov with honorary citizenship questions not only his contributions, but the historical act of the Liberation in 2012. These contributions have been recognized not only in Bulgaria, but in Europe. DPS have shown once again lack of respect for the memory of Bulgarian soldiers and ethnic Turkish volunteers who fought shoulder to shoulder and perished on the battlefield in the name of national unity," GERB state in a declaration.