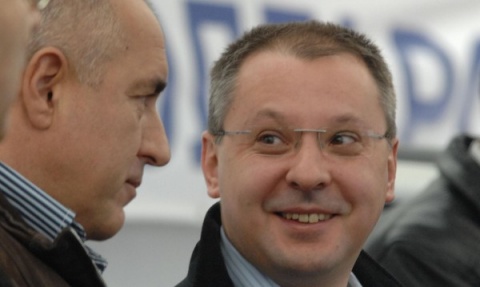 The Prime Minister of Bulgaria, Boyko Borisov (l), and his predecessor, leader of BSP and the Party of European Socialists, PES, Sergey Stanishev (r), have clashed on a number of issues, including the Belene NPP referendum. Photo by BGNES

The opposition, left-wing Bulgarian Socialist Party, BSP, is threatening national protest if the ruling GERB keep their version of the question of the referendum on the Belene NPP.

The Mayor of Belene, Petar Dulev, says the entire town is ready to rally and will be supported by residents of the city and region of Pleven.

Debates on the question are being held in the Parliament Wednesday.

The BSP Deputy Chairman, Yanaki Stoilov, announced there will be protests in downtown Sofia, but they are currently on hold in awaiting the final decision.

The government of the ruling center-right Citizens for European Development of Bulgaria party, GERB, scrapped in March 2012 the project to build a second Nuclear Power Plant in the Danube town of Belene, declaring it economically unfeasible. The pro-Belene BSP then launched a petition for a referendum on the Russian-Bulgarian project's fate.

The inspection of the petition recently concluded the 543 639 valid signatures are enough to make the vote irreversible.

MPs from the Legal Committee of the Bulgarian Parliament voted last Thursday the edited version of the question of the referendum.

Only GERB MPs had the final say on the question after three hours of heated debates. Those from the opposition BSP and the ethnic Turkish Movement for Rights and Freedoms, DPS, left in sign of protest before the vote.

The original question of the petition was: "Should nuclear energy be developed in Bulgaria through the building of a Nuclear Plant at the Belene site?"

The edited question, which was the proposal of the GERB Chair of the Legal Committee, Iskra Fidosova, postulates: "Should atomic energy be developed in Bulgaria through the building of a new Atomic Plant?"

BSP MP and former Interior Minister, Michail Mikov, proposed Wednesday to postpone debates on the Belene NPP referendum, but it was rejected.

Stoilov says the ruling party wants to "fog" the question in order to avoid the responsibility of stopping the project.

BSP further declare they would never call on Bulgarians to not take part in the referendum even if the GERB version of the question becomes final.