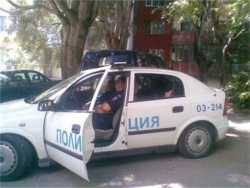 The now-notorious picture of three Varna police officers sleeping in the patrol car while on duty. Photo by Trud

A resident of Bulgaria's Black Sea city of Varna has been interrogated at the Second Police Precinct over a picture of patrol officers sleeping while on duty.

In July, the man, Boyan Maximov, took a picture of 3 police officers, apparently asleep in the patrol car, and spread it on social networks and later on TV, in what he says was a protest against the laziness and the incompetence of Bulgarian police.

He states he was provoked by the fact the police released unpunished people who had attacked him with a knife in an argument between neighbors.

Maximov further reports that after publishing the picture his life changed, with police constantly stopping him and fining him on petty grounds such as not carrying an ID card when taking the trash out or walking his dog without a leash. According to Trud (Labor) daily, he is a former prisoner, which facilitated the police in harassing him. Trud identifies him as Boyan Boozov.

He has also been summoned to give explanations as to why he had taken the picture. He admits he was in the police precinct over another case – Roma attacking him, but was asked to provide written clarifications when, where and why he photographed the sleeping patrol officers.

Police in Varna confirmed the above. They say their probe showed the policemen had taken their authorized 30-minute break and did not violate the law.

Maximov vows to not give up and has already logged a claim with Interior Minister, Tsvetan Tsvetanov, asking him to address the issues of him being questioned for taking a picture, and if the instruction on authorized breaks defines who would wake up the sleeping patrol since all three were dozing.

The Varna police spokesperson, Kalinka Pencheva, further flared the tensions with the making of the following official comment: "What can I tell you, he is an idiot; a red neck idiot, who has nothing to do and is bored."

The comment was aired in the bTV prime-time news broadcast Tuesday evening.