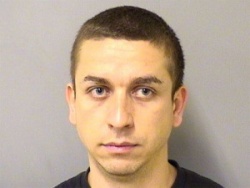 A Bulgarian man, Dimitar Vangelov, 27, has been sentenced in Chicago, US, to 4 years behind bars for bank card fraud. Photo by CBS Chicago, Credit: Cook County Sheriff's Office

A Bulgarian national, Dimitar Vangelov, 27, who was arrested in Chicago in March, has pleaded guilty to financial crimes for credit, debit and gift card fraud.

The news was reported by CBS Chicago, informing that Cook County Judge, Nicholas Ford, has sentenced the Bulgarian to four years in prison, followed by two years of supervised release, according to the Illinois Attorney General's office.

US Secret Service and DEA agents, along with Chicago Police Financial Crimes Unit officers arrested Vangelov on March 27 after executing a search warrant at his apartment in the upscale Trump Tower on North Wabash Avenue.

Vangelov was accused of re-encoding the credit and gift cards with stolen foreign bank account numbers, and was originally charged with identity theft.

Authorities further said he had no recordable income, but was living in the posh Trump Tower apartment, and driving a Mercedes Benz 500 series.