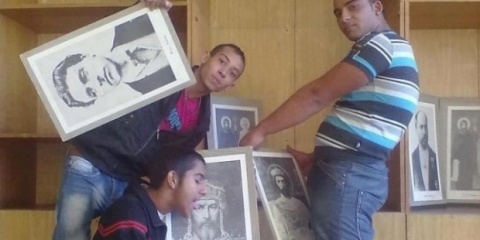 The three Roma teens seen on a picture mocking Bulgarian national heroes have been expelled from the professional high school for automobile transport in the eastern city of Dobrich.

The school principal, Petar Petrov, informed the decision has been made during a meeting of the school's pedagogical council Monday afternoon, stressing this has been the most serious sanction possible.

The three young Roma males will have to be "home-schooled" since their transfer to another high school is impossible because Dobrich does not have another one with the same profile.

The students are banned from attending classes and will have the right to take final exams at the end of the school year after studying at home.

The picture, published on Facebook, showing three young men, apparently from Roma origin, in indecent postures, holding in their hands images of Vasil Levski, Tsars Boris and Simeon, flared outrage with people calling it a disgrace, an atrocity, and mockery of Bulgarian history.

On Sunday, the leader of Bulgaria's far-right, nationalist party Ataka, Volen Siderov, declared he was going to refer the three boys to the Prosecutor's Office.

It was Ataka issuing a call to help identify the three young men. A group, quickly gathering the support of hundreds, was created on Facebook under the title "Jail for the Roma Who Derided Bulgaria."

The nationalist party reported then that the individuals have been quickly identified as members of an ethnic Turkish rap group from the village of Krushari, in the eastern Dobrich region.

Ataka say they want them charged, tried for hooliganism and spreading ethnic hatred, and sent to the detention facility for junior offenders in the town of Boychinovtsi. They vow to immediately ask Education Minister, Sergey Ignatov, and Interior Minister, Tsvetan Tsvetanov, to address the issue as well.