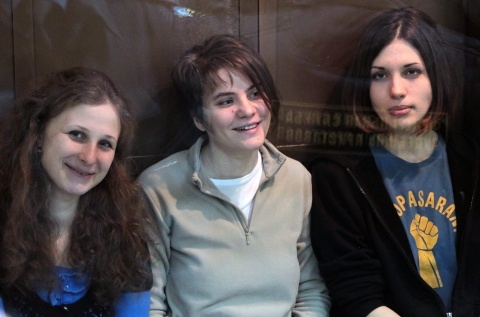 The convicted Pussy Riot punk band members Maria Alyokhina and Nadezhda Tolokonnikova, have been transferred from the Moscow detention center to a penalty colony.

The two were sentenced in August to two years in prison for disorderly conduct at the Christ the Savior Cathedral.

The news about the transfer was reported by their attorney, Mark Feygin, cited by the Russian news agency ITAR-TASS.

Feygin says he has received a phone call from another defense attorney, placed from the Moscow detention facility where his clients were kept until now, adding it has not been disclosed yet to which of the 35 women's prisons in Russia they have been sent to.

Relatives of the two young women reported meanwhile that Alyokhina had been transferred to a prison in the Perm Territory while Tolokonnikova had been sent to Mordovia.

The Federal Penitentiary Service's main department for the Perm Territory has not confirmed the above.

The three band members were sentenced to prison in August for their "punk prayer" in Christ the Savior Cathedral, Moscow's main Orthodox Church, in a case that grabbed international headlines and galvanized criticism against the Kremlin for what critics have said is a heavy-handed punishment for a light offense.

Later, the Moscow City Court reduced the sentence of Pussy Riot member Yekaterina Samutsevich's from two years in prison to probation due to the fact that she was detained by security prior to reaching the stage, and so did not actually participate in the protest.