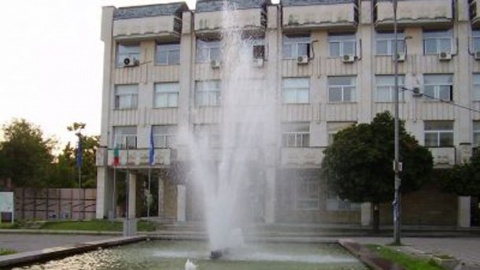 The City Hall building in Bulgaria's Kardzhali, which has a large ethnic Turkish community' became the center of tensions and heated arguments over the celebrations of the 100th anniversary of the liberation from Ottoman rule. Photo by BGNES

The left-wing BSP, and the ruling, center-right GERB decided to not boycott the solemn session of the Municipal Council in the southern Bulgarian city of Kardzhali, dedicated to the 100th anniversary of its liberation from Ottoman rule.

The issue revolves around the intention of the local authorities to award posthumously an Honorary Citizen title to Gen. Vasil Delov, as part of Bulgaria's celebration of the 100th anniversary since the start of the Balkan War in October 1912, in which Bulgarian troops liberated much of the Bulgarian-populated parts of the Southern Balkan Peninsula from the rule of the Ottoman Empire.

On Friday, the Bulgarian ethnic Turkish party DPS (Movement for Rights and Freedoms) demanded that the posthumous award of Gen. Vasil Delov be dropped from the agenda of the City Council's celebratory session scheduled for Sunday, October 21, 2012.

On Saturday, councilors from the Bulgarian Socialist Party, BSP, and from Citizens for European Development of Bulgaria, GERB, threatened to leave the Sunday celebration if Delov's nomination is rejected.

The nomination was included as the last item on the Sunday agenda with 16 council people from BSP and GERB voting for it, and 22 from DPS abstaining, thus it was not approved.

Also on Saturday, representatives of the DPS party tabled to Mayor Hasan Azis, who is a member of DPS, a petition signed by 350 locals against the posthumous awarding of Gen. Delov, prompting GERB and BSP to declare the boycott.

The arguments of the ethnic Turkish party DPS for being against the honoring of the general, who is hailed by Bulgaria as Kardzhali's Liberator from Ottoman Turkey, read that "the memories of the Balkan War are still alive, they affect people living today, and there are unhealed wounds".

On Sunday, however, politicians from all parties, including nearly the entire DPS group, laid flowers and wreaths at the General's monument in the city and bowed in his honor.

In his keynote address during the military roll-call and fireworks ceremony in Kardzhali Saturday evening, President and Commander in Chief, Rosen Plevneliev, stressed the importance of the Balkan War as a symbol of the strive of Bulgarians for independence and unification.

He further praised the courage, the self-sacrifice and the human treatment of POWs of Gen. Delov and his troops.

"This is one of the biggest lessons of the Balkan War for us, the heirs of its heroes. While preserving our national identity, we must also preserve cultural and religious tolerance as their legacy," Plevneliev said in what many interpreted as a hint about the issue, which he failed to address directly during his visit to the city.

Before the ceremony, the President met briefly with the Kardzhali Regional Governor, Ivanka Taushanova.

Visitors from all over the country and from abroad – US, Greece, Turkey, Russia, Romania – have arrived in Kardzhali for the celebrations.

October 21 has been declared Day of Kardzhali in the distant 1937.

The culmination in the celebrations of the 100th anniversary of the Balkan War is taking place Sunday evening in the Rhodoppe city of Smolyan in the presence of Defense Minister, Anyu Angelov.