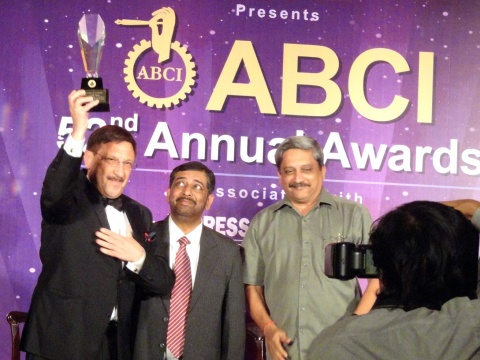 Maxim Behar (left) received the "Communicator of the Decade" Award from the President of the Association of Business Communicators of India Yogesh Joshi and the Chief Minister of Goa Manohar Parrikar. Photo by M3 Communications Group, Inc.

Bulgarian PR expert Maxim Behar has received the "Communicator of the Decade" Award of the Association of Business Communicators of India (ABCI) at a glamorous gala dinner in the Taj Mahal Palace hotel in Mumbai.

Behar has thus become the first foreigner to receive the ABCI "Communicator of the Decade" Award since the Association was founded in 1956.

"We have followed closely Maxim Behar's entire professional career. We have been very impressed, and I should point out that he won in competition with several hundred bidders," ABCI President Yogesh Joshi stated at the gala ceremony.

"This is a historic event for our Association because this is the first time we decided to award our biggest prize to a foreigner. We are convinced that Maxim Behar provides an example to thousands of young professionals all over the world, and we hope to be seeing him in India more often," he added.

Over 1 200 guests were present at the ABCI gala dinner award ceremony in the Taj Mahal Palace in Mumbai; the event attracted the attention of Bloomberg TV and hundreds of Indian TV channels, newspapers, and radio stations.

The award ceremony was the culmination of a two-day forum entitled "Communications in Turbulent Tumes", with Maxim Behar being one of the keynote speakers. His presentation on social media caused heated debates, with India having 60 million Facebook users, and 13 people on LinkedIn, the second largest group after the USA.

Behar received his "Communicator of the Decade" Award from the Chief Minister of Goa, Manohar Parrikar, one of the most popular politicians in India.

Just a month ago, Maxim Behar was awarded as a Distinguished Honoree in the Executive of the Year in Advertising, Marketing, and PR category by the International Business Awards, aka The Stevies. Before that, his company M3 Communications Group, Inc., received the Stevie Awards in the categories "Public Relations Agency of the Year in Europe" and "Most Innovative Company of the Year in Europe."

While in 2011, the prestigious The Holmes Report declared it to be the Best Eastern European Consultancy.

"This recognition makes me very happy. India is a billion-people nation which has just looked at a relatively small Bulgaria to tell the world that PR business is well developed here. I accept this award on behalf of all my colleagues, of my company, M3 Communications Group, Inc, of our partners from Hill+Knowlton Strategies, as a reward for our achievements, and the enormous efforts that we invest so that all of our clients can be certain about our professionalism," Behar stated at the award ceremony.

The Association of Business Communicators of India with its more than 1000 members is one of the most influential organizations in India. It has been organizing topical forums since 1956, and has been presenting its awards since 1961.