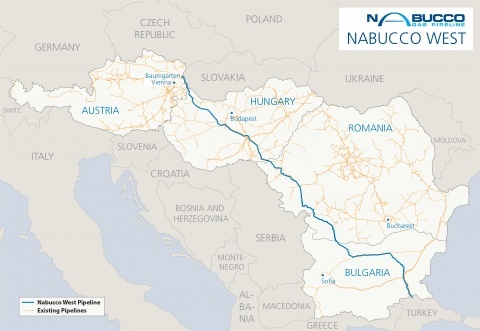 The new map of Nabucco West - the downsized version of the Nabucco gas transit pipeline. Map by the Nabucco Consortium

The construction of the Bulgarian section of the Nabucco gas transit pipeline could start around January 10, 2013, according to Bulgarian Prime Minister Boyko Borisov.

"Nabucco is a priority because we have a new source [of natural gas]. In this case, that is Azerbaijan... We told the EC that we can start the construction of Nabucco from Bulgaria's territory," he said on Saturday, as cited by BNT.

Bulgaria remains one of the six participating countries in the downsized Nabucco pipeline project, known as Nabucco West, which had to be modified after encountering political and economic difficulties.

In May 2012, the Nabucco Consortium presented the revised, smaller version of the gas pipeline project called Nabucco West to the consortium developing the Shah Deniz II gas field in Azerbaijan.

The 1300-km pipeline Nabucco West is to carry Caspian gas from the Bulgarian-Turkish border to the Central European Gas Hub (CEGH) in Baumgarten and beyond.

The Nabucco group said that the revised version of the project would benefit from the existing legal framework such as the Intergovernmental Agreement, Project Support Agreements and third party access exemptions, that have already been negotiated.

The original pipeline was 3,900 kilometers long and ran from the Eastern border of Turkey to Baumgarten in Austria.

MOL and RWE have questioned the feasibility of the original version of Nabucco, threatening to leave the project company.