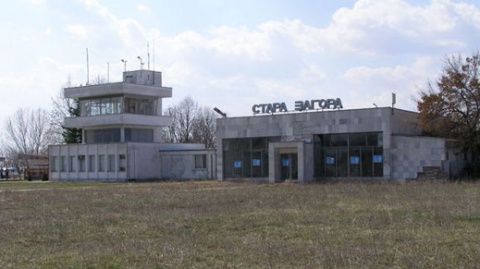 View from the defunct Stara Zagora Airport, which is located between the international airports of Plovdiv and Burgas. Photo from money.bg

A large French construction company has expressed interested in investing in the defunct airport in the Southern Bulgarian city of Stara Zagora.

This has been revealed by the company that is in charge of managing the non-functioning airport in Stara Zagora, Stara Zagora Airport Jsc.

According to the company, the French investor planned to rehabilitate the runway, bring in latest equipment, and even build a VIP terminal in order to use the airport in Stara Zagora for private planes and helicopters. New facilities such as a private school for pilots are also considered.

In early 2012 there were reports that a South Korean company is interested in taking over the airport in Stara Zagora, Bulgaria's sixth largest city, in order to build a logistics hub.

Bulgaria's Transport Ministry has indicated that potential investors from China, Singapore, and Kazakhstan have also considered the defunct airport in Stara Zagora, which was shut down 11 years ago.

For the time being, the Stara Zagora Airport is only used by agricultural planes. It first had an international flight in 1975 but no large planes have used it since 2001.

Back in 2011, Bulgarian Prime Minister Boyko Borisov demanded actions from his ministers with respect to the Stara Zagora Airport, after he passed by and saw that it looks as if it had been "bombed."

Back then, Transport Minister Ivaylo Moskovski explained that three of the buildings belong to the Transport Ministry, while the runway and the entire plot are owned by the Defense Ministry; at the same time, the airport tower is property of the Bulgarian Air Traffic Service Authority.