Bulgaria to Set Up Tent Camp for Syrian Refugees in Harmanli 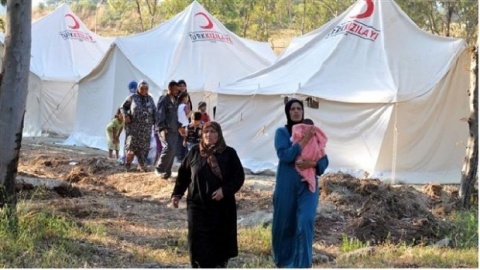 Harmanli citizens, as well as the local authorities have opposed the establishment of a tent camp for immigrants in the town center. pHOTO BY bgnes

The military barracks in the southern Bulgarian town of Harmanli are undergoing urgent repair works to turn into a temporary refugee accommodation center within a month.

The establishment is meant to accommodate 1000 people in case of necessity, according to reports of private TV station bTV.

The step is taken due to the fact that temporary refugee accommodation centers in Bulgaria are nearly brim-full because of the growing number of Syrians entering the country illegally on a daily basis.

Harmanli citizens, as well as the local authorities, however, oppose the establishment of a tent camp for immigrants in the town center.

According to bTV, a major Syrian refugee wave is still quite far away from Bulgaria, but the everyday attempts of illegal immigrants to enter Bulgaria are turning into a problem because specialized accommodation centers are already 90% full.

In a bid to solve the problem, Bulgaria's government approved the establishment of the first tent camp in the country on the terrain of the former military barracks in Harmanli.

Irena Uzunova, Haskovo District Governor, suggested that the terrain would take one month to prepare under an optimistic scenario.

Although tents will only be opened in case of necessity, Harmanli residents oppose the idea, and the people living closest to the designated terrain are most worried.

The Mayor's Office of Harmanli also criticized the idea, the Mayor saying that he had ended up being the last to know about the establishment of the refugee camp.

Meanwhile, the Haskovo District Governor argued that people's fears were unfounded, which still failed to convince locals that the security would be efficient.

The refugee center in Harmanli is to open only in case of a major refugee wave, or some 500 foreigners simultaneously crossing Bulgaria's border illegally.

So far, the biggest groups of detained on the Bulgarian-Turkish border have consisted of 12-15 people, bTV reminds.