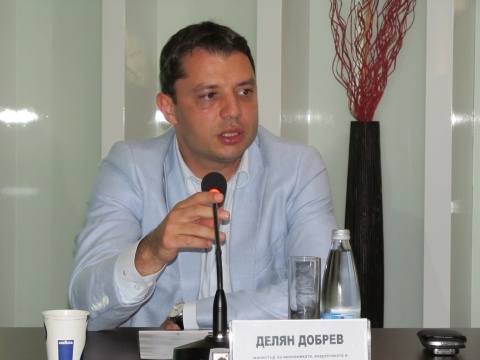 Bulgaria's Economy and Energy Minister Delyan Dobrev has boasted about the results of state measures to attract investors. Photo by BGNES

Bulgaria's Economy and Energy Minister Delyan Dobrev has suggested that some state measures to attract investors set out in the amendment Investment Promotion Act are already yielding results.

In a Thursday interview, as cited by the Bulgarian National Television (BNT), he promoted the results of the reimbursement of social security payments to big investors and the opportunity for projects in the sphere of services to take advantage of such privileges.

Dobrev added that the privileges had only been applicable to investments in equipment and real estate prior to the recent amendments.

He specified that big Bulgarian and foreign investors had had the opportunity to not pay social security contributions for their employees for a period of 2 years, adding that the Ministry of Economy, Energy and Tourism had earmarked a sum of BGN 2.5 B for the measure.

Dobrev assured that the step would be beneficial for the state budget.

"In exchange for this, we save the money for unemployment benefits, which amount to BGN 700 000 – 800 000 for the first nine months, while the law requires that the jobs are kept for a period of five years. Over the next three years, over BGN 3 M will be added to the social security budget," Dobrev stated.

Bulgaria's Economy and Energy Minister was positive that the step had already attracted investor interest, adding that an Indian IT company was about to create no less than 900 jobs in Bulgaria, all of them outside Sofia – in Ruse, Varna, Burgas, and Plovdiv.

He further said that a leading Canadian telecom company which had recently set foot in Bulgaria was also planning to increase its staff by 200%.

Dobrev argued that the administrative burden on businesses would be reduced by 20% by end-2012.

He announced that the e-government would be launched in spring, adding that the majority of the first 5000 cards for accessing the service would be given to companies because they were most often in contact with the administration.