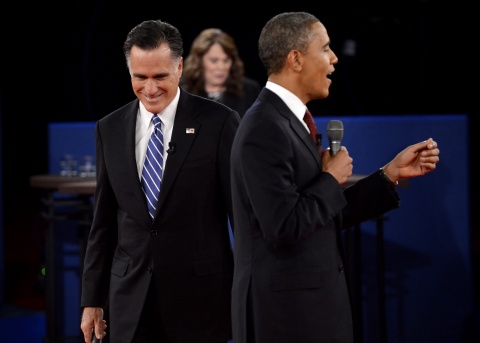 US President Barack Obama won the the second of three presidential debates against his Republican challenger Mitt Romney on Tuesday night.

The first presidential debate held on October 3 was won by Republican nominee Mitt Romney, according to polls and analysts.

During the first 90-minute duel focused on taxes, the deficit and healthcare, Romney scored a 46-67% margin, as compared to Obama's 22-25%.

As regards the October 16 debate, polls cited by CNN showed that 46% of respondents thought Obama won, compared to 39% for Romney.

The 90-plus minute debate was held at Hofstra University in Hempstead, New York in a town hall-style setting with CNN's Candy Crowley as moderator.

Taking intro account his mistakes at the first debate in Denver, Obama was more assertive and even aggressive.

The rivals often interrupted each other and tried to implicate each other in lies.

Experts say that a debate victory does not entail a victory at the presidential elections.

During the debate, US President Obama said the five-point economic plan of his Republican challenger was actually a "one-point plan" to help the rich at the expense of the middle class.

The Republican argued that the charge was way off the mark.

The second presidential face-off started with an exchange on the country's high unemployment rate.

Energy issues spurred a tense exchange between the two contenders for the White House.

The Republican Party candidate sharply criticized Obama's energy policy, vowing that his plan would free America from the import of foreign oil.

Obama touted renewable energy sources, including wind and solar, while Romney attacked the president for limiting oil drilling on federal land and shutting down coal plants.

The two also discussed women's issues, including equity in the workplace, women's health, and access to contraception, and recent attack on the U.S. Embassy in Benghazi in which Ambassador Chris Stevens and three others were killed.

Polls indicate that the undecided voters will be crucial in the tight race for the White House on November 6.

The third and final presidential debate is scheduled for October 22 in Boca Raton, Florida.