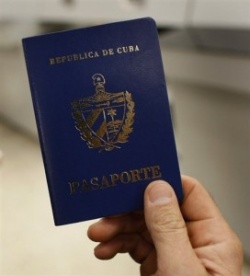 File photo of a Cuban passport

Cubans willing to leave their country will no longer need to apply for exit visas, as the requirement is to be lifted on January 14 2013.

As of that date, Cubans will only have to show their passport and a visa from the country they are traveling to.

The move is expected to "update" migration laws to reflect current and future circumstances, according to Cuban state media.

Cubans who have permanent residency on the island will also be allowed to stay abroad for up to 24 months, instead of the current 11, without having to return to renew paperwork, BBC has informed.

Until now, Cubans had to pay USD 150 for an exit visa. A resident in the country that the Cuban wanted to visit would also have to write a letter of invitation with fees associated with the letter reaching USD 200.

The average monthly income in the country is USD 460.