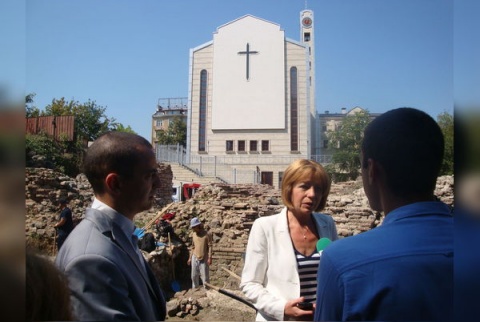 Sofia Mayor, Yordanka Fandakova, visited archaeological works in the center of the city; the St. Joseph catholic cathedral is seen behind. Photo by livenews.com

Archaeologists have discovered colorful floor mosaic from the Roman era near the so-called West Gate of Serdica in downtown Sofia.

The news was announced Monday by the Mayor of Sofia, Yordanka Fandakova, who visited the archaeological excavations in the company of her Deputy in charge of Culture, Todor Chobanov.

The mosaic has an area of 40 square meters and is located in the ruins of a Roman building discovered for the first time between 1975 and 1980 when archaeologists began exploring the site. The works were later abandoned and remained unfinished.

Serdica's West Wall followed the current "Washington" and "Lavelle" streets to the Central Court building. Fragments of it can be seen in the yard of the largest catholic cathedral in Bulgaria "Saint Joseph."

Fandakova said there is likelihood the mosaic is part of a large basilica, which continues under "Washington" street, adding it means archaeologists are to continue their work there to fully uncover "the wealth of Sofia." She stressed the key importance of preserving this wealth and displaying it in the urban environment in order make the city an even more attractive destination.

"The basilica shows the standing of Serdica during the rule of Roman Emperor Constantine the Great (274-337)," the Mayor concluded.