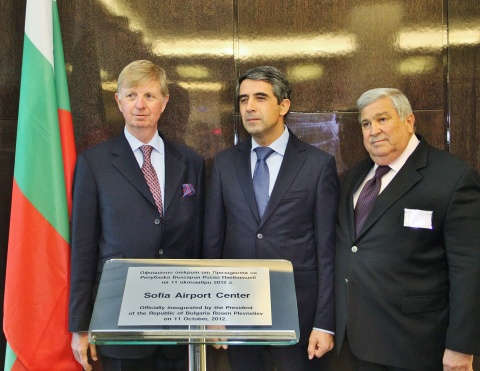 An exclusive interview with Alan Levy, Chairman of Tishman International Companies, on the occasion of the Grand Opening of Sofia Airport Center, a EUR 350 M office and logistics development, including the formal inauguration of the first ever LEED-certified Class A office building in Bulgaria.

You've spent lots of money, time, and efforts on this investment. Now that it is completed, is it what you expected it to be?

Yes, it's turned out to be what we called the wow factor. Did you park on the parking lot, and walk up the Spanish steps, as we call it?

What was your impression when you got up there?

It is impressive. I don't think I've seen anything like that in Bulgaria.

You have not, and you won't for a long time. That was our intention – to create something that had never been done before – both in terms of the building itself, with technology and mechanical systems that we have for creating the eco-friendly, LEED-certified building, to the landscaping, the exterior, and the whole ambience; to create an impression and an atmosphere that is different from anything else – very relaxing, very suburban.

When we are finished developing the entire Sofia Airport Center, the investment will total about EUR 350 M, which is probably, as far as we know, the largest private investment of its type in Bulgaria. We are proud of that.

We wanted to create something big, different, with international flavor; something for which the international tenants would come, which is our target for them, so that what they see will be closer in quality and facilities to what they would experience in their home country.; so that down the road an international investor would look at it and see that it is of the quality according to the highest EU standards and the local Bulgarian standards, with some American and English touches to it.

The market seems pretty tough. Your establishment here is one of its kind for the region but do you have any concerns about the market?

Well, we wish it was 2007 again, and 2008-2010 didn't happen but you can't control the world. We didn't envision that we would have the crisis that we had, and we thought the market would continue to be robust as it was when we first started out in 2004.

But we see strengthening signs now. We are talking international users who are eying Bulgaria and the 10% flat personal and corporate tax as well as the lower cost of living expense is very attractive to them.

There is more interest from international users being generated. So we have hopes.

We hope that Greece will solve its internal problems soon, and that the euro will strengthen, and that the world will somehow come to be closer to where it was. But it will take a while.

When you started, did you have high expectations for Bulgaria and Sofia as a logistics hub?

No, it's mixed use. In the Logistics Center, all the warehouse space that we built have been leased.

The office space is 85% leased so we are pretty much on our original target. Some of the rents fell during the crisis but when we first started leasing, the rents were higher than we had projected.

Have you witnessed anything changing in terms of Bulgaria becoming more open to international trading routes and logistics?

Now we see a larger demand for logistics space, and have designed the Sofia Airport Center to be flexible so some of its space could be either office, or logistics, and we are now looking at logistics.

We have a couple of tenants who want to expand, and I think we will build additional logistics space for them. You know, you must address the market needs.

As we lease this office building up, we will start with out second office building, and keep going. Right now in Bulgaria logistics seems to be in greater demand than Grade A office space.

As a foreign investor, what is your take on the Bulgarian economy? It's seems to be getting nowhere in the past couple of years...

It's been slow. Now it's up. The unemployment was up, now it's down a little bit. GDP was down, now it's increasing a little bit. It's slow, there is no question about it. The world is slow.

What is your recommendation for the Bulgarian authorities?

I have been talking to various departments of the Bulgarian government to try to encourage them to develop some enticements and / or subsidies to, to attract FDI, foreign direct investment.

Companies who want to move here look at the region, and say, "What can you offer us?" "Oh, we got a 10% flat tax?" says the Bulgarian government. They answer, "OK, but what else?"

They will compete with subsidies somehow to allure that company to come over and create jobs.

With what we have built out at Sofia Airport Center, we think we are going to have 8000-10 000 people working here. It's like a small city.

It started to help a little bit because the InvestBulgaria Agency is now investing some money in road shows, going to different countries. I think they are now about to go to Singapore and Tokyo, to try to entice foreign tenants to move here.

It will take something a bit more ingenious than that - in my view, and in the view of the other AmCham members, because we did the road show in the USA with President Plevneliev recently, and many people said, "What are you offering us?"

We had an interview 3 years ago, when Bulgaria's new government had just taken over. Back then, you seemed optimistic about it as a foreign investor?...

As something new, you have expectations for a new broom that will sweep clean. I think everybody had such expectations, a new party, new ideas that would foster more growth.

Because of the EU money that came in, when Rosen Plevneliev was the Regional Development Minister of Bulgaria, a lot of the infrastructure got rebuilt, jobs got created, part of that was his vision, his entrepreneurship, and his background in real estate and construction.

He saw things that hadn't been done, he was able to maybe get a little more EU money than others might have. Now as President of Bulgaria, he has many interesting ideas. He is thinking ahead in order to make Bulgaria better, and to keep the young folks here while attracting foreign investors.

You have to be thinking outside the box, as we would say, and I think the Bulgarian government is trying to do that. But politics are politics. Whenever one party says it's good, the other says it's bad.

I know that you worked with Bulgarian President Rosen Plevneliev back when he was a developer. I remember that 3 years ago you were a bit surprised to see him become a government minister, and now you see him as President of Bulgaria. Was that a good choice for Bulgaria?

I think it was a great choice. A) Because of his background – somebody who is not a politician, but with business ground. Somebody who has been there, done that, who understands the problems. Because sometimes, if elected officials had never been in the trenches, they don't understand what the real troubles are.

Jumping across the Atlantic, how do you expects the US elections will play out economically?

If the people don't say, "Hey, fellows, we gave you this job, if you want to be reemployed when it comes election time, , we need some action from you. Get serious, get some action, be commercial, and do what's good for the country!" So that's how you have to deal with politicians' promises sometimes because all they want is to get reelected.

If we go back to Sofia Airport Center, it involved a manager like yourself spending a lot of time in Bulgaria. How has this project changed you? What sort of an experience has it been for you personally investing in Bulgaria?

I travel usually two weeks at home, and two weeks in Europe. Most of my two weeks in Europe are in Prague, and in Sofia. I've been coming to Bulgaria for about seven years, and I have seen how the country has grown, and become more westernized, more educated, more mature.

It has acquired a broader vision about the rest of the world than it had before – thanks to the Internet, TV, people traveling. Bulgaria is maturing.

I used to ask people if they know Prague, and tell them that Sofia is what Prague was 10 years ago. We are roughly 10 years behind in the growth and maturation of the country but it is getting there. It's going to take a while longer.

You've had the Grand Opening of SAC. What is your message with this investment?

What Tishman is doing with our investment in Sofia Airport Center in Bulgaria is to honor Bulgaria and its young people by inviting several of the Bulgarian Olympians and Paralympians to be honored at our opening.

We have provided financial grants to the federations and teams, so that the youngsters can get into sports. It's healthy. This ties into our healthy Grade A buildings.

We are here, we like to be good citizens, we like to contribute to the community and the economy where we do business, and we think that by helping the young people we can demonstrate that we appreciate the courtesies that Bulgaria has shown to us. We are here to help them and help ourselves, obviously but to create more jobs, and hopefully we will produce financial results for us as well.