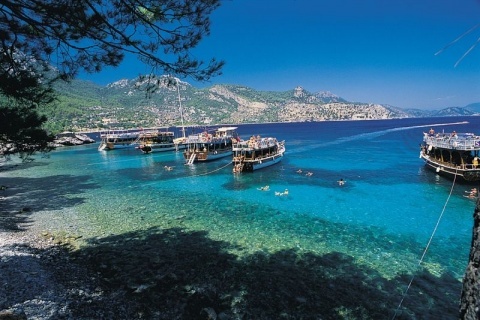 A group of Bulgarians, staying in the Turkish resort of Marmaris, were informed by a hotel representative that they will have to leave or pay for their stay, as their Bulgarian tour operator had failed to do so. Photo by Marmaris.org

Bulgarian tourists who were stranded in Turkey by the travel company On Travel are returning home Saturday.

Deputy Minister of Economy, in charge of Tourism, Ivo Marinov, assured the trip to Bulgaria is guaranteed. Some will come on a regular flight of the Turkish airlines and others will be transported by bus.

The insurer of On Travel, DZI bank, is accepting documents to pay compensations. 150 such documents have already been received. The company will reimburse all additional expenses of Bulgarian tourists vacationing in Turkey.

Meanwhile, Marinov's Ministry announced plans to negotiate with insurers a measure to provide tourists not only with a copy of the contract with the tour operator, but a copy of its insurance policy. It is believed this will guarantee Bulgarians' vacations all over the world.

According to data from the Economy Ministry, the On Travel insurance policy is in the amount of BGN 1.4 M, which will be sufficient to reimburse all claimants.

It was revealed Thursday that 38 tourists from Bulgaria have found themselves in a limbo in Turkey. They were informed by a hotel representative that they will have to leave or pay for their stay, as their Bulgarian tour operator had failed to do so.

The Bulgarians had already a booked flight back for Saturday. They have paid both the flight and the hotel accommodations to On Travel, however, the tour operator had not transferred the funds to hotels, as claimed by their representatives.

On Travel was involved in a similar stranding of Bulgarian tourists in Spain last week.

The Ministry of Economy already launched proceedings to take away its license.