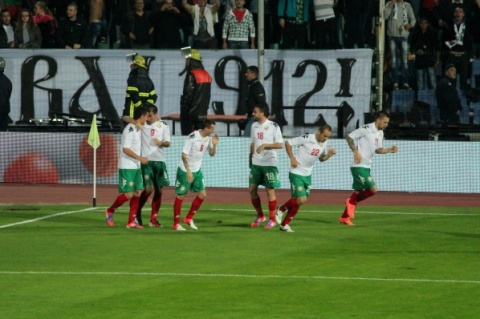 Bulgaria's national football team drew Denmark in a World Cup 2014 qualifier in Sofia despite playing with 10 men for almost 70 minutes after its right back Ivan Bandalovski got a red card.

??Dmitar Rangelov put Bulgaria ahead in the seventh minute, heading the ball past the Danish goalkeeper Stephan Andersen after a cross from Ivan Bandalovski.

The home team kept pressing in an attempt to extend its advantage, but was seriously weakened when right back Ivan Bandalovski was shown a straight red card in the 25th minute for a professional foul.

The equalizer came in the 40th minute, when Nicklas Bendtner took a pass from Michael Krohn-Dehli and found the back of the net with a header from inside the box.

Denmark used its advantage in the second half to create several chances, including a couple of one-on-one situations with Bulgaria goalkeeper Nikolay Mihaylov, who made several good saves to preserve the result.

Bulgaria is second in Group B with five points, two behind group leader Italy. Denmark has two points in two games.