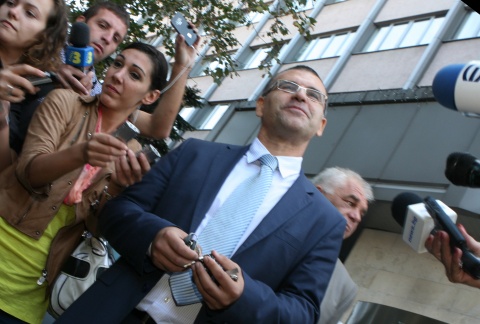 Bulgarian finance minister has made clear his strong determination to push through parliament the proposed 10% tax on bank deposit income from next year.

"I do insist that Bulgaria starts taxing people's income on their bank deposits from next year. In this way the country will join the European banking system," Simeon Djankov told the morning broadcast of Nova TV channel on Friday.

He explained that thus Bulgaria will be able to collect taxes on the income from deposits and investments of Bulgarians abroad.

"This is the European practice - we also pay taxes on deposits of foreign nationals in our country to other European countries such as Germany, France and Britain," the finance minister specified.

In his words the new levy will help improve social equality and force richer people with huge bank deposits to pay tax on that income.

He agreed that the introduction of a tax-free threshold is a good idea, but said it was too early to discuss it.

The minister also attacked the previous Socialist-led government for introducing a flat income and corporate tax rates of 10% without setting a tax-free threshold.

He strongly disagreed with accusations that the new levy will shake the bank system foundations due to capital outflow, saying Bulgaria's system is the most stable and well capitalized in Europe.

A new 10% levy on people's income on their bank deposits will come into force from next year, the government decided at the beginning of this week.

Bulgarians will be obliged to include the income on bank deposits in their tax declarations a year later – in 2014 – after the taxation process is streamlined, the finance ministry has suggested.

Both economists and the central bank have slammed the government's decision to introduce a 10% tax on bank deposit income, saying this would dent people's savings and shake the bank system foundations due to capital outflow.

The government said the new tax aims to raise BGN 120 M and force richer people to pay taxes on the income they earn from bank deposits.

Banks in Bulgaria continue to record steady growth in savings, a trend which has been gaining momentum throughout the past half year, official data shows.