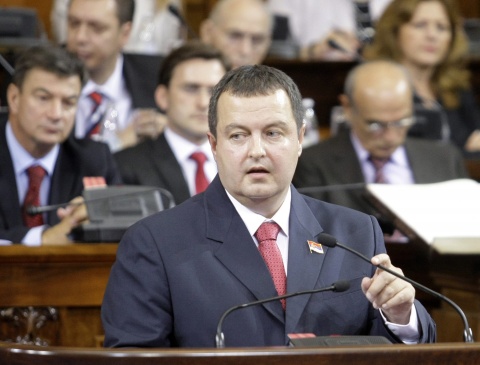 Serbian Prime Minister Ivica Dacic has expressed disappointment over demands of the European Commission for Serbia's relations with Kosovo, after the publication of an EC progress report on Wednesday.

"EC's insistence that Serbia preserve the territorial integrity of Kosovo could put an end to the dialogue with Kosovo, instead of helping to resume it," Serbian PM Dacic warned, as cited by Serbian media and the Bulgarian news agency BGNES.

"I am disappointed by this message. Perhaps it would have been fairer if they had demanded that Serbia recognized Kosovo instead of recognizing its state sovereignty," Dacic is quoted as saying at a news conference on Wednesday.

Dacic did explain that the demand that Serbia recognize Kosovo's territorial integrity was not present in its EC progress report but in "another EU document", without specifying what sort of document that was.

The Serbian PM further made it clear he would ask EU Commissioner for Enlargement Stefan Fuele, who is due to visit Serbia, to explain whether the protection of Kosovo's territorial integrity was a new condition for Serbia's EU membership. He stressed that, should that be the case, Serbia would consider this new condition unacceptable.

"We can't help Prishtina to complete its unilaterally declared independence. If this formula hasn't been interpreted correctly by us, we will be ready to continue our dialogue with Prishtine," Dacic added.

He further expresses his surprise at the "lack of understanding" on part of the EU for Serbia's efforts to join the Union and to normalize its relations with Kosovo.

The former Serbian province Kosovo declared its independence from Serbia in 2008, and has already been recognized by more than 90 UN member state.

Because of the existence of a large ethnic Serbian minority in Northern Kosovo, and an ethnic Albanian minority in municipalities in Southeastern Serbia bordering Kosovo some circles in both Serbia and Kosovo have floated the idea of exchange of territories or other border adjustments, which however seems unlikely to win any support by the EU and the USA.