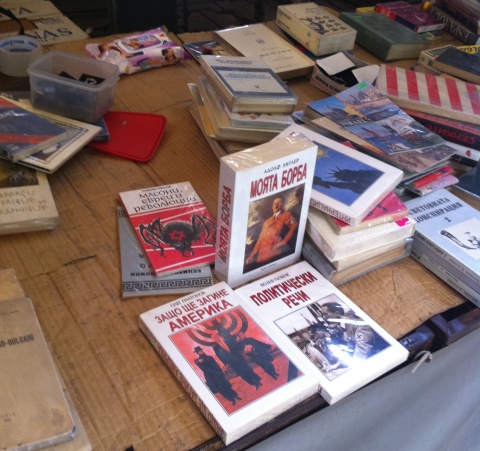 A photo shows a book stand on a street in Sofia selling Adolf Hitler's Mein Kampf, together with other anti-Semitic books and "global conspiracy" literature. Photo by BGNES

Nazi symbols that are banned in Germany are sold widely in Bulgaria, the leading German paper Frankfurter Allgemeine Zeitung reports.

Nazi paraphernalia are about as easy to buy in Bulgaria as vegetables, and one can easily purchase everything necessary to dress up like Adolf Hitler, the author of the report (HERE in German), Bernhard Honnigfort, points out, after a trip in Bulgaria.

In his words, Hitler's book Mein Kampf ("My Struggle") is obligatory for any "self-respecting" Bulgarian flee market.

The author further reports he discovered busts of Adolf Hitler on sale in antique shops in the Black Sea resort of Sozopol and the southern city of Plovdiv, sold side by side with busts of communist revolution chief Vladimir Lenin.

According to the report, it is unclear who purchases such items but there is no doubt that there seems to be a demand for them.

Hitler's images and swastikas also reported to be sold on brand new clocks or paintings, compasses, and bottles. An "interesting" item is said to be a hunter's penknife with an inscription "Alles fuer Deutschland" ("Everything for Germany").

The author notes that a shop on the beach in Sozopol offering costume photos gives tourists to opportunity to dress up as pirates, knights, cowboys, Louis XIV, Napoleon or Hitler. However, its owners react angrily when one tries to photograph them.