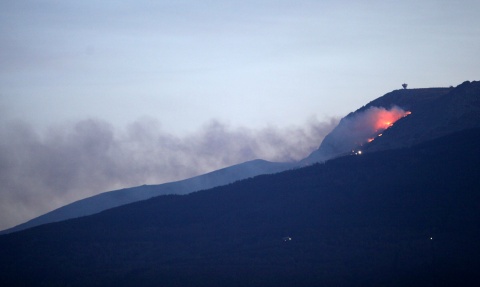 The blaze on Vitosha Mountain as seen from Bulgarian capital Sofia Tuesday evening. Photo by BGNES

Bulgaria's firefighting service has reported it has partially contained a wildfire that erupted Tuesday on the Vitosha Mountain just outside of Bulgarian capital Sofia.

The fire service has said that it has not entirely limited the blaze, but hopes it will not expand until Wednesday, when operations are to fully resume, writes OffNews.bg.

Firefighters, foresters and volunteers are still working at the site late Tuesday evening, and have already blocked the blaze on two fronts.

Around noon Tuesday, citizens alerted about a blaze in the Mecha Polyana (Bear's Glade) area between the Aleko center and the Bistrishko Branishte reserve in the mountain.

The billowing smoke, fanned by high winds, is clearly visible from Sofia, which is located on Vitosha's northern foothills.

Bulgaria's firefigthing service has reported that the blaze is hard to tackle due to the terrain and windy conditions.

70 firefighters and foresters have been sent to the location, which has encompassed some 10 acres of alpine grassland and pine forest.

Last Thursday firefighters managed to quench a similar wildfire that erupted in the area of Vitoshko Lale ski runway.

In early July, a large wildfire in a difficult area of the Bistrishko Branishte reserve took the efforts of hundreds of firefighters, foresters and volunteers to extinguish for no less than seven days.

The July wildfire coincided with largescale protests against amendments to Bulgaria's Forestry Act, which citizens said were tailored to benefit investors such as the Vitosha Ski company, which had announced intentions to expand activities in areas of protected nature.