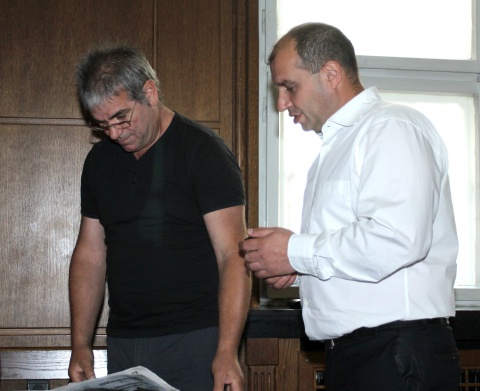 Two of the defendants in the case, Orlin Avramov (L) and Plamen Kalaydzhiev (R). Photo by BGNES

All three defendants in the case for the 2000 murder of Bulgarian lawyer Nadezhda Georgieva have been acquitted by the Sofia City Court in a sitting Tuesday.

The case has gained notoriety after one of the witnesses implicated Bulgaria's former Prosecutor General, Nikola Filchev, in masterminding the cruel killing of Georgieva.

The link with Filchev has however not being confirmed during the legal proceedings.

At the court sitting Tuesday, the prosecution had demanded 25 years in prison for each of the defendants.

The prosecution had claimed that the three brutally killed lawyer Georgieva due to bad personal and professional relations with her.

One of the defendants, businessman Orlin Avramov, owed money to her, and she refused to provide legal advice for him or his companies.

The other two, the former married couple Plamen Kalaydzhiev and Dimitrinka Kalaydzhieva also had poor relations with Georgieva.

Tuesday the Sofia City Court pronounced that the three are to be considered innocent due to lack of sufficient evidence for committing the deed.

The defendants expressed their relief and welcomed what they said is the objective stance of the court.

During the trial, the Kalaydzhievs had openly admitted that they were present in Georgieva's home at the day she was murdered, but resolutely denied perpetrating the killing.

On his part, Avramov claimed that prosecutors had framed the three in order to cover up Nikola Filchev's possible involvement in the case.

Lawyer Nadezhda Georgieva was killed in her home in Sofia, having sustained nine blows with a kitchen cleaver on February 28, 2000.