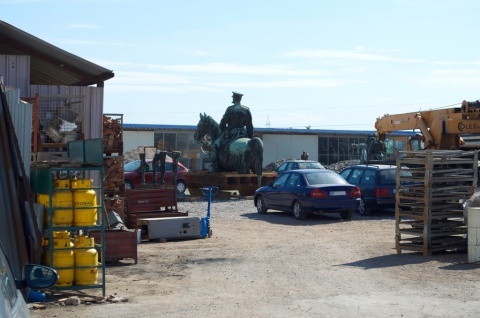 The monument of Tsar Osvoboditel (Liberator) is currently located in a backyard in the village of Trebich near Sofia. Photo by Bulgaria for Citizens

The Russian news agency ITAR-TASS has dedicated an article on the alleged outrageous abandoning of the Monument of Russian Tsar Alexander II, one of Bulgarian capital Sofia's main landmarks, in a village backyard.

ITAR-TASS reminds that the monument, which was located in front of the Parliament in downtown Sofia, was dismantled in September to undergo restoration with the Russian Foundation "Pamet" (Memory) slating EUR 500 000 for it.

Restoration experts announced earlier that their work will be extended by a month, until the end of December 2012, because the state of the sculpture was worse than expected.

On Sunday, sculptor Velislav Minekov and art expert Lyudmil Veselinov, members of the newly formed opposition Bulgaria for Citizens party, revealed that the monument is currently located in a backyard in the village of Trebich near Sofia, with no restoration work being performed on it.

According to Minekov, the monument has been totally abandoned and is now surrounded by "a complete mess."

He insists the monument could have been restored for two and a half days and for much less than for much less than the BGN 1.2 M announced by authorities, adding he suspected a corruption deal where the dismantlement has been initiated by investors who want to construct a parking lot beneath it.

The Chairman of the Bulgarian Construction Chamber and head of the restoration team, Svetoslav Glosov, fired back Monday, accusing Minekov of politically motivated attacks. He assured the monument is in the yard of an art atelier and is well-taken care off.

Known as the Monument to the Tsar Liberator, it is one of the top masterpieces of Italian sculptor Arnoldo Zocchi, and was unveiled in 1907, since when it has been a landmark in Sofia, ITAR-TASS reminds.

It celebrates Alexander II, the Russian Tsar "Liberator" who led the 1877-78 war against the Ottoman Empire, which resulted in the liberation of Bulgaria.