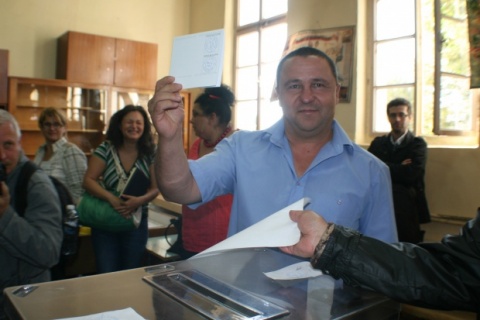 With 88.27% of the vote, Rumen Stoyanov, nominated by an initiative committee and supported by BSP won the mayoral term in Kalofer. Photo by BGNES

The candidates of the opposition left-wing Bulgarian Socialist Party, BSP, and of the other major opposition formation, the ethnic Turkish party Movement for Rights and Freedoms, DPS, have won the partial local mayoral elections held in Bulgaria Sunday.

The largest vote took place in the central town of Kalofer where incumbent mayor, Rumen Stoyanov, nominated by an initiative committee and supported by BSP, got 88.27% of the vote (1 475 total), Yordan Kolev, from the nearly-extinct party of former Tsar and Prime Minister, Simeon Saxe-Coburg, National Movement for Stability and Prosperity, NMSP, is second with 9.3% (155 votes), while Lalka Dragoeva from the ruling Citizens for European Development of Bulgaria party, GERB, is third with just 2.5% (41 votes).

In the other locations, BSP and DPS have 2 mayors each, GERB got one, while in the rest there will be run-off elections.