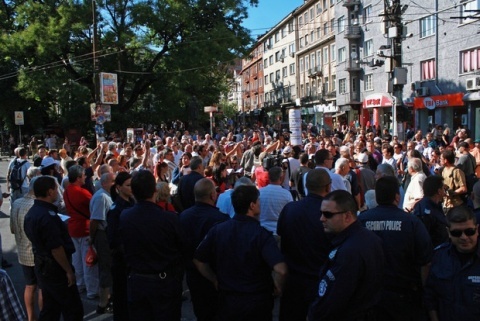 The Supreme Administrative Court, VAS, postponed Friday the case against the new parking rules and fees in Bulgaria's capital Sofia.

The case was rescheduled for December 7 on grounds one of the claimants was not present for the Court session and the petition against the rules, signed by 63 000 people, had not been attached to documentation.

About 700 people waited outside the Court building to hear the magistrates' rule.

Representatives of the civil movement DNES (Today), which challenged the new ordinance in Court, labeled the decision protraction and vowed to continue staging protest rallies. The outraged citizens are currently protesting in front of the building of Sofia City Hall.

The new parking fees for people who live in the central areas of the Bulgarian capital Sofia became effective Monday, October 1.

Those residing in the so-called Blue and Green zones will be punished by putting a bracket on their tires, making it impossible to move the vehicle, if they park near their homes without a special vignette sticker or sending a short-text message, SMS, to pay for the spot. The removal of the bracket costs BGN 30.

Monday was the deadline for the grace period during which those living in downtown Sofia could park their cars for free, by living a note that they have applied for a vignette sticker.

Under the new ordinance, people living in central areas of the city in the so-called blue and green zones, are now obliged to pay an annual fee of BGN 150 and BGN 100 respectively for the vignette sticker. Families living there have to dig even deeper in their pockets and pay fees three times higher if they have a second car. But even if the fee is paid, a parking space is far from certain.

The Sofia municipal council approved the hike in parking fees at the beginning of March.

The fee for an hour's stay in the blue parking zones in downtown Sofia increased from BGN 1 to BGN 2, under the adopted program for development of the public transport.

The fee for parking in the green zone in Sofia was set at BGN 1 per hour.

Drivers are allowed to park their vehicles in the blue and green zones for no more than two and four hours respectively.

With the enforcement of the new parking rules and fees for the central areas of the Bulgarian capital, in addition to workdays, the Blue zone became effective for Saturdays as well, from 8 am to 2 pm.

The demonstrators are slamming these changes as nothing short of racketeering and arm-twisting.