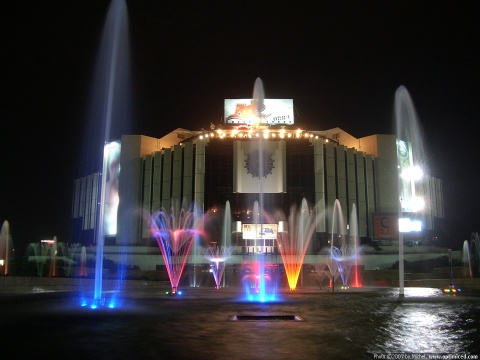 The mega show “Miracles of Bulgaria,” staged by Standard daily filled to the max Hall 1 of the National Palace of Culture. Photo by optimiced.com

The Belogradchik Rocks and the Magura Cave were declared the newest Miracles of Bulgaria Wednesday evening, while the Plovdiv area masters of puppets from corn husk and foliage won in the intangible treasures category.

These are the final results of the campaign "The Miracles of Bulgaria 2," held under the initiative of the Bulgarian Standard daily, aiming at choosing new Bulgarian treasures to be added to the list of protected cultural heritage of the UN Cultural Organization UNESCO. Over half million of Bulgarians voted online for "The Miracles."

The winners were announced by Standard's Editor-in-Chief, Slavka Bozukova, after the mega show, staged by the media at Hall 1 of the National Palace of Culture in downtown Sofia. With it the daily also celebrated its 20th anniversary.

The goal of the initiative is to help the State in protecting at least two more Bulgarian treasures by including them in UNESCO's World Heritage List of properties forming part of the cultural and natural heritage, which the World Heritage Committee considers as having outstanding universal value.

Bozukova vowed the above and promoting Bulgaria will remain her mission and the mission of Standard.

The final results can be seen on the official site of the campaign at bgchudesa.com.

Hall 1 was sold out and filled with thousands-strong audience, gathered to see the magnificent show, which displayed Bulgaria's history and achievements through music and light. Two wide screens and a mountain on the stage added to the glow.

As Standard writes, the show resembled a time machine, giving the spectators the opportunity to travel through the most important moments of the country's history, and see the sources of pride for Bulgarians such as the unique folklore, the legacy of Saint Cyril and Saint Methodius, the creators of the Cyrillic alphabet, and their disciples, the sports heroes, the great minds and leaders, among others.

Bulgaria's heritage was presented by a young and beautiful Bulgarian woman - Bilyana, portrayed by popular singer and actress Neti, in the form of a tale and trip through centuries with her foreign boyfriend John (Vesselin Anchev), who left London to learn about Bulgaria. At the end Bilyana found her lost identity while John grew even fonder of her.

The exhilarated audience met all of them with thundering rounds of applause. The culmination came with the performance of the decades-popular song "My Homeland, My Bulgaria" by pop icon Miro, who brought everyone to their feet, singing and clapping.

The concert was attended by President, Rosen Plevneliev, Culture Minister, Vezhdi Rashidov, the Minister of EU Funds, Tomislav Donchev, the family of the Minister of Economy and Energy, Delyan Dobrev, the Member of the Parliament from the ruling Bulgarians for European Development of Bulgaria party GERB, Deyan Chervenkondev, the MP from the opposition Bulgarian Socialist Party, BSP, and former Interior Minister, Rumen Petkov, MP BSP, Maya Manolova, prominent archaeologist Prof. Nikolay Ovcharov AKA the Bulgarian Indiana Jones, and the Chairman of the Council for Electronic Media, CEM, Georgi Lozanov, among others.

In the aftermath, Rashidov awarded Standard with the highest order of the Culture Ministry "Golden Century," making the daily the first Bulgarian media to receive the honor.

"We must bow to this media! Imagine how one newspaper managed to motivate 500 000 Bulgarians vote for their country's miracles. People have realized that we have a history that needs to be told to the world, that we are special and different. I hope your ambition and vision will generate a spark in more State officials to also present together the future success of Bulgaria as a worthy European country," Plevneliev said, quoted by Standard, in personally congratulating the daily's team.

The material ones are: the Boyana church, the Ivanovo rock churches, the Kazanlak tomb, the Madara rider (horseman), the old town Nessebar, the Rila monastery, the Sveshtari tomb, the national natural park Pirin and the natural preserve "Srebarna."

The intangible include the choir of the Bistritsa Babi (Bistritsa Grand Mothers) and the Nestinari dancers.