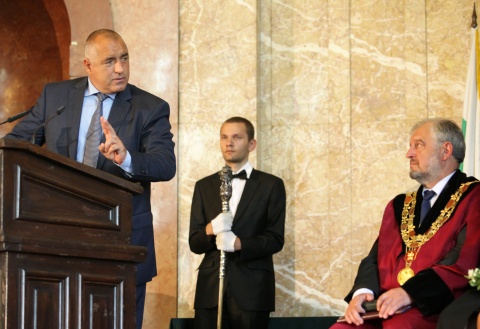 Bulgarian Prime Minister Boyko Borisov has focused on praising the extension of the Sofia Metro at the opening of the new academic year at Sofia University "St. Kliment Ohridski".

Borisov told the students that all lines of the metro reach the university, apparently referring to the much celebrated opening of the second line of the Sofia Metro at the end of August, which, however, technically does not "reach" the university in question.

"Now, when you go to school, you can see the parks, the flowers, the boulevards, and you can come by metro from anywhere. That's why we are here – to make that happen," the Bulgarian PM told the students, as cited by the Focus news agency.

In his speech for the start of the academic year, Borisov further discussed some of the other priorities of his administration – namely, the construction of highways. He said that at the beginning of the 21st century there is no need to argue over whether highways are necessary, or not.

"People in the other EU countries, people are saying - "enough with the highways, we'll be building railways because it is more environment friendly". If it had been easy to build these seven highways that we're talking about, the previous governments would have been built them. They have cost a lot of efforts to a lot of people – not only the actual builders but also those who designed them, and provided the funding," the PM.

"I come to the Sofia University with lots of respect. We like talking about education but only two universities [in Bulgaria] have taken advantage of the EU operational program funding, and have managed to realize projects," he added.

Borisov admitted that education in Bulgaria has not achieve the necessary level yet, and he urged the university faculty to mull over the flaws that Bulgarian university graduates end up with.

"The flaws in education become flaws in professions, and in the realization of projects by the state or the private companies," he stressed.

While wishing the students good health and best of luck, and successful academic work, Borisov noted that "half of Europe is in a recession, and the other half expects to enter a recession."