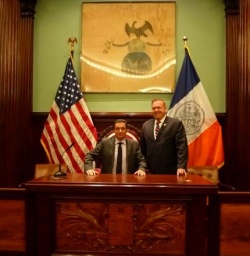 Yanev, who is on a 10-day working trip to the US, spoke from NYC, where he attended a number of events, organized by the election headquarters of City Councilman Daniel Halloran. Halloran is currently campaigning for the Congress.

The main goal of the visit is participation in meetings and events organized by the presidential election headquarters of the US Republican party.

According to RZS, Yanev is the first Bulgarian politician, who will be part of the heated presidential race in support of the Republican nominations.

On Sunday, Yanev was an official guest of a reception, organized by the Jewish community in Halloran's support, in an Israeli restaurant in Manhattan.

There, Yanev noted that recent years have presented a huge challenge for the security of the State of Israel, all neglected by the Obama Administration. He further voiced disappointment of the "toothless position of the White House on the terrorist attack at Bulgaria's Sarafovo airport near the Black Sea city of Burgas, which killed 5 Israeli tourists and their Bulgarian bus driver."

"This reaction shows Obama's indifference towards the friends of America," said the Bulgarian conservative leader.

He called on the Jewish community to support Halloran as "a man strong enough to fight for including in US foreign policy the issues of counterterrorism and opposition to radical Islam, which are crucial for Bulgaria as well."

Halloran, on his part, declared that after the US, only two other countries will always be in his heart – Bulgaria and Israel. He promised to have Sofia and Tel Aviv as the first two cities he would officially visit after becoming a Member of the Congress.

After threatening to "fire" Prime Minister, Boyko Borisov, during the 2011 presidential elections, and calling him Bulgaria's Caddafi, Yanev recently became notorious once again by turning into Borisov's and his ruling Citizens for European Development of Bulgaria party, GERB, strongest ally.