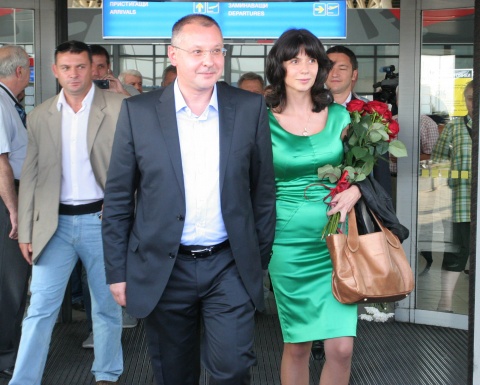 PES and BSP leader, Sergey Stanishev, arrives at the Sofia airport, greeted by a crowd of supporters, including Monika Yanova (r), his live-in girlfriend and mother of his only child. Photo by BGNES

The newly-elected President of the Party of European Socialists, PES, Bulgaria's Sergey Stanishev, declares he would not give up on being the leader of Bulgarians Socialists as well.

Stanishev, a former Prime Minister and Chairman of the main opposition Bulgarian Socialist Party, BSP, made the statement Sunday evening, upon his arrival from Brussels, where, at the 9th PES Congress, he was elected almost unanimously (91% of the vote)  to head of all Socialists in Europe.

Speaking before a crowd of 200 supporters and followers, gathered to greet him at the Sofia airport, shouting BSP!, he stressed his election in Brussels was a new chance and a show of support for BSP as well, while the Congress' message was that Socialism is returning to Europe.

From the airport, Stanishev's fans, singing the song of the legendary Communist-propaganda TV series "Na Vseki Kilometer" (On Every Kilometer), headed to the Sofia restaurant "The Mausoleum" for a beer party to celebrate the election.

The cortege was led by a police patrol car. The establishment is located at the spot of the Mausoleum of Communist leader, Georgi Dimitrov, which was demolished shortly after the fall of the Berlin Wall.

Socialists, quoted by the Bulgarian Trud (Labor) daily, have commented that the restaurant has been selected on purpose because after Dimitrov, serving as Secretary General of the Communist International between 1935 and 1943, no Bulgarian has been honored by such prestigious political post.

Meanwhile, the Speaker of the Parliament, Tsetska Tsacheva, from the ruling center-right Citizens from the Citizens for European Development of Bulgaria party, GERB, openly admitted that despite being an adversary, Stanishev's election is prestigious for Bulgaria.