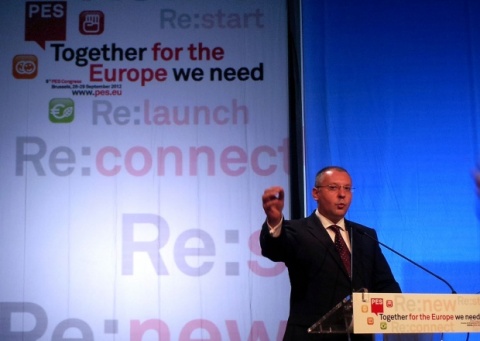 Sergey Stanishev, Bulgaria's former Prime Minister and current chair of the Bulgarian Socialist Party, has been elected Permanent President of the Party of European Socialists (PES).

Stanishev, who has been the interim President of PES for almost a year, has now been elected in his own right, after he was the only candidate for the position at PES's annual congress on September 29, three weeks after it emerged that none of the other 34 left-wing European parties used the opportunity to nominate their candidate.

A total of 345 delegates from the 34 parties, including Members of the European Parliament, and representatives of the youth and female structures of PES attended the party congress that elected Stanishev.

A total of 91.3% of the delegates votes in favor of Stanishev's election as PES President.

In his speeches prior to the PES Congress, Stanishev has vowed to focus on youth and youth problems such as youth unemployment, and to save the young people of Europe from becoming a "lost generation."

Stanishev has been the chair of the Bulgarian Socialist Party since 2001 when its previous chair Georgi Parvanov was elected President of Bulgaria. Initially viewed as Parvanov's protege, Stanishev became firmly established to the extent of even beating Parvanov in BSP's leadership election in the spring of 2012, after Parvanov completed his second presidential term and sought to regain party leadership.

In 2005-2009, Stanishev was Bulgaria's Prime Minister heading the much criticized government of the three-way coalition consisting of his Socialist Party, the National Movement for Stability and Prosperity of ex Tsar and ex PM Simeon Saxe-Coburg, and the ethnic Turkish party DPS (Movement for Rights and Freedom).

While presiding over Bulgaria's EU accession in 2007, the Stanishev Cabinet has been widely criticized for its institutional weakness, inefficiency, and partisanship, and has been marred by a number of major corruption scandals.