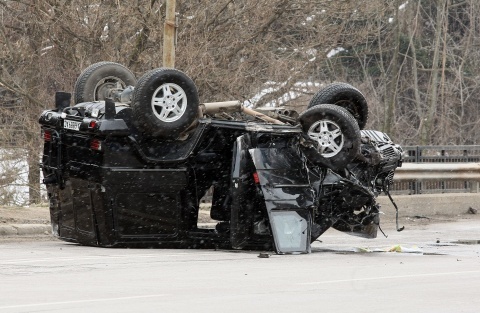 Two men, 31 and 53, traveling in a Kia were killed on the spot in the traffic accident caused by alleged mafia boss Yosifov in March 2012. Photo by BGNES

Top Bulgarian criminal Yosif Yosifov aka Yosko, who caused a hellish accident in March, killing two, has tried to attract the attention to his health problems as he is waiting for his sentence.

Yosifov was sentenced to eight years in jail at the first instance court and is waiting the last word of the appeal court in a month.

At the Friday's hearing of the court, his lawyer said he is feeling better now and can make a few steps without the wheel chair.

He declined however to comment on photos in the media, showing the defendant walking easily without a wheel chair.

Two people died on the spot and three others sustained serious injuries during a head-on collision between a Mercedes SUV and a Kia van with Blagoevgrad tags in the affluent Boyana district of the capital Sofia.

According to the police, the armored SUV was driving at a speed of 200 km/h when it smashed into the van.

A little bit after 7 am, the SUV entered opposite traffic and, after failing to reinter its lane, hit head-on the van. Two men, 31 and 53, traveling in the Kia were killed on the spot; three others are listed in critical condition in the emergency Pirogov hospital in the Bulgarian capital.

The driver of the SUV, Yosif Yosifov aka Yosko, 42, has a long rap sheet for a variety of crimes. He was one of the defendants in the high-profile kidnap case of a Croatian citizen from a night club in the western town of Slivnitsa. Yosifov was sentenced to two years behind bars, but later released on appeal.

Yosko's group is connected to some of Bulgaria's top high-profile murders for higher, including the one of notorious mafia boss Konstantin Dimitrov, aka Kosyo Samokovetsa.