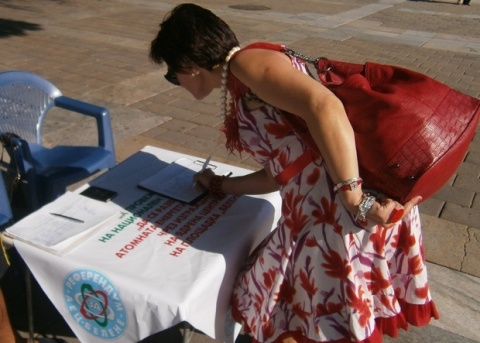 The inspection of the petition initiated by Bulgarian socialists on the Belene NPP project has confirmed 543 639 valid signatures, enough to make the vote irreversible. Photo by dariknews.bg

The inspection of the petition of the Bulgarian Socialist Party (BSP) for a referendum on the Belene NPP project has concluded, with 543 639 valid signatures, enough to make the vote irreversible.

Under Bulgarian legislation, the Bulgarian Parliament is under an obligation to call a referendum if a petition is backed by no less than 500 000 valid signatures.

The results of the inspection of the 717 021 signatures collected by BSP were submitted to Parliament Thursday, Bulgarian Sega daily reports.

The number of valid signatures is sufficient to make it obligatory for Parliament to call a referendum.

The Bulgarian Parliament can only amend the wording of the question(s) without changing the meaning.

By end-October, the petition must be reviewed by parliamentary committees and a plenary session must adopt a decision backing the vote.

After the Parliament adopts a decision, the President must set a date for the referendum.

Center-right ruling party GERB asked Parliament to authorize Delyan Dobrev, Minister of Energy, Economy and Tourism, to conduct negotiations with a private investor for the construction of the nuclear power plant.

The Bulgarian Socialist Party (BSP) suggested that MPs had to revoke their decision for freezing the project.