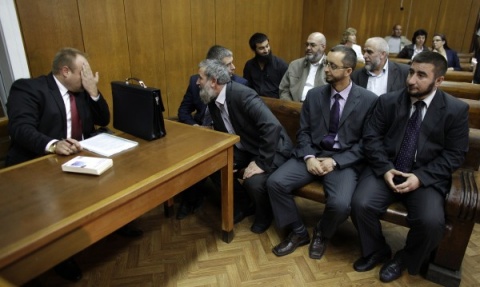 The trial against the 13 members of the Al Waqf-Al Islami organization's branch in Bulgaria was launched on September 18. Photo by BGNES

The District Court in the Bulgarian town of Pazardzhik is to hold on October 29 a new hearing in the trial against 13 suspects who were allegedly preaching radical Islam in the country.

The decision came after a 13-hour-long session, ending late Thursday evening, and is grounded on evidence presented by both the prosecution and the defense counsel.

The trial against the 13 members of the Al Waqf-Al Islami organization's local branch was launched on September 18.

All suspects have pleaded not guilty.

Protected witness 003 has said that he cannot comment on facts and circumstances related to classified information, and denied being present at the alleged receiving of money by the defendants during a trip to Saudi Arabia.

He has testified that one of them, Ali Hayrettin, had been among the founders of Al Waqf-Al Islami in Istanbul, and is the organization's coordinator in Bulgaria.

The witness has further informed that he had received evidence about the meeting in Istanbul in 2008, when the Bulgarian branch of the organization has been established, through "tools and devices of the Secret Services, and this was classified national security information." The same, he has said, is valid about details on the budget and financing of the organization.

003 has declared Bulgarian youth are not banned from studying in Medina or Saudi Arabia, and after that from being employed at the Chief Mufti's Office or other religious organizations, stressing the State should not interfere in religious matters.

The protected witness has also explained he had not been part of the seizing of computer data; had not spied on the defendants' emails, and had not been present at their lectures and preaching, but knew the participants.

The magistrates upheld the request of the defense counsel to hear expert testimony only after all witnesses - the remaining three protected ones and four others are questioned. Two of the latter are to be brought to the Court forcefully, while the one who has requested a translator with be provided with the service, the Court ruled.

The interpreter was designated as Maya Tsanova, lecturer at the Sofia University, Arabic expert, and interpreter in the case of Bulgarian nurses, jailed in Libya.

Bulgarian Muslims staged several mass protest rallies in front of the Court building. They say the charges are groundless and they fear a new "Revival Process," a remake of the one from the 80s of the last century when the Communist regime forced them to change their Muslim names with Christian ones, is looming in Bulgaria.

The Bulgarian Chief Mufti's Office has condemned the trial, saying the accusations were exaggerated and manipulative.